Albatrosses and petrels under severe threat 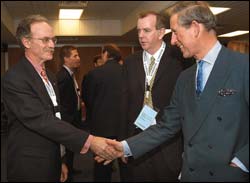 UCT fared well at the recent Waterbirds Around the World conference in Edinburgh, which included over 450 scientists and government officials from 90 countries, gathered to review progress in migratory waterbird conservation.

Among the six poster prizes awarded, two went to delegates from the Avian Demography Unit, Jenny Griffin and Aeshita Mukherjee. Colleague John Cooper delivered the closing plenary lecture - an overview of the migration patterns and the conservation of both albatrosses and petrels in the Southern Ocean - aware that one very special guest was hanging on his every word: HRH The Prince of Wales, who appeared at the tail end of the conference.

"I am just relieved that I arrived in time to hear John Cooper's riveting presentation," he told the audience.

Cooper said that tracking devices had shown that these birds follow oceanographic and meteorological features to maximise their foraging abilities at sea, resulting in "hot spots" of regular occurrence.

Like many other "one-time mariners", The Prince of Wales said he had "a very special affection for these remarkable birds" and praised the efforts of the research fraternity- and their support crews - for their efforts to collect the data necessary for the evaluation of the scale of the problem and the potential for solutions.

"The scientific effort has been matched by BirdLife International and other non-governmental organisations bringing these issues to the attention of a wider public," he added.

"Its emphasis on international cooperation is an essential first step to tackling the multiple threats to such a wide-ranging group of birds," HRH said in his address.

But ratification by all parties will be the essential step in ensuring its success.

"The level of international cooperation achieved in the Southern Ocean stands as an exemplar for the pelagic seabirds of other oceans," Cooper said.