Marine researcher hopes to hit the water in NZ 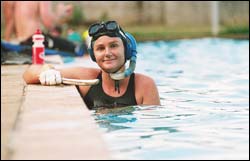 In deep water: Rebecca Rademeyer will represent South Africa at the World Underwater Hockey Championships in New Zealand in March

It's not something you're likely to see professional rugby or cricket or even the legion of underpaid soccer players agonise about.

While sponsors and officials lavish money and cars and kit by the truckload on those in the Big Three, the rest of the South African sporting world has to scrape by.

Take the case of Rebecca Rademeyer, a doctoral student and researcher with the Marine Resource Assessment and Management Group.

Rademeyer has just been selected to represent South Africa at the World Underwater Hockey Championships that take place in Christchurch, New Zealand, from March 20 to April 3. The biennial event is the premier competition on the underwater hockey calendar (it's not an Olympic sport), attracting players from some 14 countries.

The SA teams have picked up their share of medals at previous championships - the games encompass both open events and masters and under-19 competitions - and so are likely to bag a couple more this year.

To make sure she gets to Christchurch, Rademeyer has had to raise R18 000 on her own. Which means she's had to go around, cap in hand, to sponsors and administrators to scare up some cash (UCT sports administration has kicked in a couple of thousand rand).

It may not be the glam life of an elite sportsperson one reads about in the pages of Sports Illustrated, but it's all worth it, says Rademeyer.

"It's a fun sport," she noted. "I love being underwater."

Rademeyer only donned goggles and glove and wooden stick during her undergraduate years at UCT, although she had been swimming and diving for years. She was in her element, and rapidly progressed into the Western Province B and senior sides.

She made her national debut at the Trans-Tasman championships against Australia and New Zealand in 2000.

At 27, Rademeyer is in career-midstream, underwater hockey players competing well into their 30s. Which means she still has time to realise a couple of goals.

Winning a gold medal at the World Championships in March is first among these.

Thus the zeal to raise whatever money it takes to get to New Zealand, even if sponsors tend to overlook the minor sporting codes and the players wearing South African colours.

"It's frustrating sometimes," said Rademeyer. "But if you love the sport . . ."