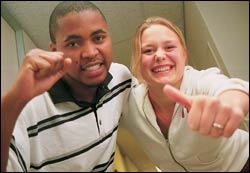 The ceremony in Jameson Hall last Wednesday night was a colourful affair, with a jazz band and the UCT choir providing the music, as 10 awards were made to students who have excelled in leadership on campus this year.

Monyatsi won his prestigious award for his dedication to the Student Representative Council over the past year. He has a passion for student governance and has been instrumental in promoting UCT. Besides the key role he played in the UCT Gender Forum, and has made many contributions to national conferences.

Wijsenbeek, was recognised for her contribution towards promoting gender and racial equality at UCT. Her work as part of the forum helped to ensure that the issue of gender violence, in particular rape is addressed, culminating in a very successful UCT march against all forms of gender violence earlier this year. The commendation also said she had been a superb liaison for students and the SRC with student organisations.

Student leaders from the university and across the Western Cape, as well as prominent UCT alumni, business, and community leaders were also invited.

Khotseng said Wijsenbeek had "provided women student leaders at UCT, both present and future, with a solid role model and an excellent example to follow".

UCT alumnus Andile Mazwai and Naledi Pandor, Chairperson of the National Council of Provinces and Chancellor of Cape Technikon, were the guest speakers, who motivated and congratulated student leaders at the university.

"Student leadership is about preparing for government and entrepreneurship", said Pandor. "Their achievements are important for the future of our country."

Other awards made at the ceremony were:

In her message Kaunda said: "In many ways, student leadership at UCT has contributed to the mission of the university through outstanding leadership. Through the various formal structures, they contribute to the development of local communities in the Western Cape and nationally. It is these endeavours, contributing to institutional transformation, development and nation-building that we wish to acknowledge through the Student Leadership Awards".