Little hope as Springboks gear up for world cup 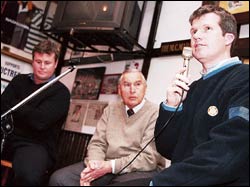 Things were downright downbeat at the UCT Rugby Club's barroom last Tuesday evening, and it wasn't just because of the liberal flow of beers on the night.

The occasion was the most recent gathering of the club's 200 Club - comprised of old boys and patrons - where a three-strong panel was parleying on the Springboks' prospects in the looming Rugby World Cup (RWC) in Australia. And once the obligatory witty retorts to the issue on the table - what has to be done for the Springboks to win the World Cup? - were concluded (recruit 15 Englishmen, tie up Jonny Wilkinson), members got down to some serious and not-so-serious (remember the beers?) discussion.

Fielding questions were UCT club president Dr Cecil Moss, a former UCT, Western Province and Springbok coach (his pedigree of 10 wins out of 12 games makes him one of South Africa's most successful coaches over the past 20 years); rugby scribe Andy Colquhoun; and former Canadian (two World Cups) and Springbok cap Christian Stewart.

Steering clear of pointless bellyaching, the three, in response to questions from the floor, tried to give a sober assessment of the team and its chances in the upcoming tournament.

As expected, views on coach Rudolf Straeuli took up plenty of airtime. "The real issue is that it isn't Straeuli's fault," said the vocal Stewart (he is an auctioneer, after all).

"It's the people who appointed him who should have recognised that, bottom line, he didn't have the skills. I don't think he is anywhere near the right man for the job."

Instead, noted Stewart, former players and coaches like Nick Mallett, Alan Solomons, Brendan Venter, Francois Pienaar, and the two Du Plessis' - MornÃ© and Michael - should be called in for input. CornÃ© Krige's captaincy also came under scrutiny. "There's no doubt in my mind that CornÃ© Krige is a very popular rugby man and a very popular captain," observed Moss.

"In the absence of any other person, I think he's the best man for the job at the moment. What worries me - and I guess it worries a lot of other people as well - is his propensity for getting injured. "And there's also the question of whether he is just good enough to get into the team at the moment."

Colquhoun concurred, and bemoaned the lack of suitable alternatives to Krige in the SA squad. The English side, in contrast, is laden with experienced proxies who have led either the national or club teams, he pointed out.

"They're shot through with captains, with decision-makers, with experienced players."

South Africa's youthful, callow side - 11 of the 30 players in the South African RWC squad have not played a game for the Boks this year - has few such warhorses, he noted. "It's boys against men."

And even should the Springboks - ranked sixth (and lucky to be there) in the world - against all expectations walk off with the Webb Ellis trophy (cue incredulous guffawing), a post showpiece shake-up is imperative, the panel agreed.

"The World Cup isn't a true indication of your rugby strength," commented Moss as Colquhoun indicated that South African teams have collectively won only 23% of their games in the Super 12 competition over the past years.

"There's so much wrong with South African rugby that winning the World Cup won't solve all the problems."