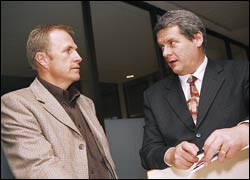 The fledgling Sports Law Association of South Africa (SLASA), founded last year by scholars and lawyers from the Western Cape and Gauteng, hosted its maiden public lecture at UCT in mid-August.

Tony Irish, CEO of the South African Cricketers' Association (SACA), delivered the Association's first talk, speaking on Players as Stakeholders in the Game. SACA, noted Irish, is a trade union for South African cricketers and represents about 190 of the nearly 200 professional players - national and provincial - in South Africa.

Irish's host SLASA was established in November 2002 with funding from the UCT Faculty of Law. Covering areas such as contracts, doping, imaging rights, ambush marketing, affirmative action, even funding via the lottery - all within the context of sport - the Association hopes to address the often-neglected legal issues in the multi-billion rand sports industry.

"Basically, the Association wants to stimulate research into sports law, an emerging area of interest," explained Rochelle le Roux, deputy director of UCT's Institute of Development and Labour Law and SLASA secretary. SLASA also plans to get involved in policy issues and to develop a group of people skilled and experienced in sports law.

SLASA currently has around 20 members. It will host a second talk in October.