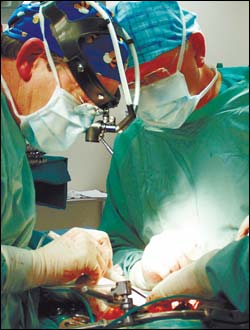 Professors Jake Krige and Flip Bornman from the Department of Surgery used a dissecting sealer earlier this month to perform a liver resection on a 70-year old pensioner at the UCT Private Academic Hospital. The patient, who had a rare form of cancer, had 60% of her liver removed during the four-hour operation. This was the first time that surgeons in the Western Cape had used the groundbreaking device, known as the Tissuelink dissecting sealer.

Following media reports of the new procedure, Krige (principal surgeon) said a Chinese engineering firm had approached him to evaluate a high-intensity ultrasound device that may have applications in liver surgery.

He said the most impressive feature of the Tissuelink dissecting sealer was that blood loss during the operation had been significantly reduced from about half a litre to only 30ml in this patient (roughly two tablespoons).

The device uses radiofrequency with saline as the conductive fluid. This activates the collagen in the blood vessels, causing it to shrink and effectively seals tissues and blood vessels when heated.

PerryHill International, the local distributors for Tissuelink technology, donated the device to UCT Hospital and to Krige because of his international reputation as a leader in liver surgery. The liver team in UCT's Department of Surgery has performed over 200 liver resections.

"As the liver is very vascular, blood loss is probably the most life-threatening complication of liver surgery," he explained. "The device definitely makes surgery easier, but it's especially good news for patients as they are far less likely to require blood transfusions after surgery," he added.

The patient, who thought she had no hope, said Krige had given her a "chance to live again". Having made a "remarkable recovery" she was discharged last Wednesday.

"I'm really looking forward to enjoying my own home and seeing my friends again. They have been so supportive,' she said.