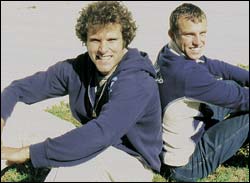 It was a surfing trip to Bali that gave second-year physiotherapy student Michael van Rheede an idea, an unconventional way to pay his university fees. On the pristine Balinese beaches sea and sun worshipers of various sizes and shapes were paying hard currency to be pummelled and contorted, slapped and walked on - and mostly by sturdy local women of mature years.

"I thought it would be a cool way to get enough cash to pay off my student loan," he added. Sure enough, back in South Africa on Clifton's famous beaches, where Van Rheede and classmate Divan Augustyn had "played a bit of touch" (rugby, that is) after class, the plan came to fruition.

Van Rheede had a diploma in therapeutic massage and enlisted Augustyn's talents in this area. Together, the two drew up a business plan (being good UCT students with a well-rounded education), sought a sponsor and approached the City Council and the Department of Physiotherapy to sanction their idea. In December they planted their massage plinths and umbrellas in the Clifton sand.

It was tough going at first. "We were very nervous," Van Rheede confirmed.

"There we were in our white vests and trousers, with our white leather plinths and umbrellas ("Very clinical and clean," Augustyn interjected) advertising our Swedish massage, with everybody just looking at us." (Uproarious laughter.)

At first, no-one approached them. Eventually, feeling very forlorn, they offered their ministrations (free) to two young women passing by. Soon there were clusters of people waiting for a turn. After each 20-minute massage, they would take a 10 minute break and begin again. (As they are unqualified physiotherapy students they stayed well clear of this side of things.)

"Some mornings we would get there to set up and find people already waiting," Van Rheede reported. During December they each gave 200 deep tissue massages. The unit cost? A mere R50, or the price of a pint for the mainly tourists (Americans, Germans and Europeans) who formed the bulk of their clients. There were plenty of tips, too.

An idyllic sounding vacation job, the work was not without its potential pitfalls. "We had swotted up on aromatherapy oils and knew some were phototoxic, in other words they would turn you yellow in the sun," Van Rheede explained. "Especially on the Brits. So we avoided those."

Some days were quiet, usually when the weather was inclement, and the duo would relax, read, or play touch rugby. "We met so many nice people, it wasn't a schlep at all."

There is also a noble side to their story; Augustyn had a hernia operation at the Red Cross Children's Hospital when he was only fours hours old and spent the following three months there. The two decided (in true UCT spirit) to "give something back". They donated 10% of their earnings to the burns unit at the hospital, something that has given them much satisfaction. Both have a rapport with children, having worked with many small patients in the course of their physiotherapy studies, many with cerebral palsy. Augustyn has worked at the hospital as a volunteer and they hope to do their community service there.

In the meantime, look out for them on Clifton this year - and the next - where they will be dispensing arnica oil with a firm hand. No pummelling, no slapping and definitely no contorting.