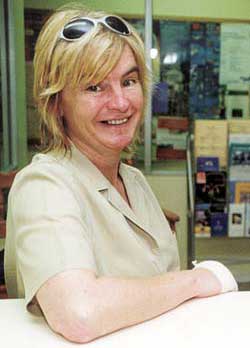 Caz Thomas, previously Deputy Director of the International Academic Programmes Office (IAPO), will take the reins as head of the organization from May 1.

Lesley Shackleton, IAPO's Director since its inception in 1996, has accepted a two-year secondment to work with Deputy Vice-Chancellor Associate Professor Cheryl de la Rey on a research project on gender equity in higher education.

Thomas, who has also been with IAPO since 1996, was well qualified to head the office, Shackleton said. "She is well-known nationally and internationally in the international education sphere and is currently Vice President of the Executive Committee of the International Education Association of South Africa (IEASA), having served on the body for some time.

"Caz has been very involved in securing higher education input to the new immigration act and legislation and was recently awarded the IEASA Certificate of Honour for her contributions."

Shackleton will continue to devote a third of her time to internationalisation at UCT but admitted that she was thrilled to have the opportunity to work on the international gender equity project with De la Rey. "It complements all my work with HERS-SA, and is an area I am particularly interested in," she said.

Thomas was equally upbeat about her new post. "Little did I think when I left the Percy FitzPatrick Institute of African Ornithology as their Departmental Administrator that I would rise to become the head of IAPO.

"IAPO, though, has always been a team effort, from the time Lesley and I started it in a room at the top of the Centre for African Studies in 1996 to the present day with our team of 25."

Thomas said the change of leadership also provided the team with an opportunity to consolidate and build on their strengths to better serve the UCT community in what she termed "this new era for IAPO". "I have learnt a lot from Lesley, and benefited enormously from her management style."