Almost but not quite for UCT's Jacques Terr Blanche 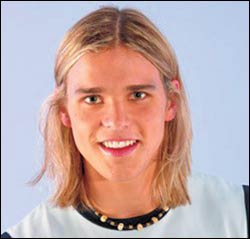 Singing sensation Jacques Terr Blanche proved to be more than just a ballad singer when he made it to the top three in MNet's popular Idols competition.

Terr Blanche, who is studying for a BMus degree at the South African College of Music at UCT, suspended his studies for the rest of the year to participate in the competition, which searches for a new young singing star to become South Africa's next idol.

Being a classical singer, many doubted his pop singing talents, but the UCT hopeful showed his capabilities when he made it this far into the competition.

While singing songs from groups like Red Hot Chilli Peppers and Extreme, he wooed fans, especially teenage girls and their mothers, with his honeyed voice and boyish looks.

Idols however, came to an end for the Cape Town performer when he was voted out last week.

"I was glad in a way when I left the show because now I will have the freedom to do what I want to do, which the winner might not have," he said.

Due to his success on Idols, Terr Blanche has been signed with BMG Records and will be managed by Mike Fuller. He will thus not continue his studies next year.

Obviously happy with his achievements and the exposure he received, Terr Blanche said he would "do what is important right now", and that is grabbing the opportunity he is getting.

Last week, asked whom he thought would win the competition, Terr Blanche simply answered: "Anke. She is the only one who has not been in the hot seat."