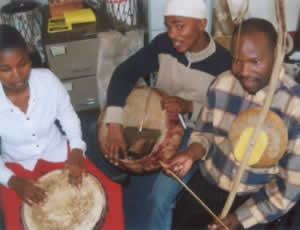 "AFRICAN music has never been promoted in South Africa, and when I talk about African music I am not talking about Kwaito or other sorts of popular 'African' music," says Dizo Plaatjies, lecturer and course coordinator in African Music at UCT's South African College of Music (SACM).

Plaatjies explains that the popular perception of African music tends to be affected by neo-African music, but pure African music is music that uses classical African instruments only and has no western influences.

"The African music my students study and play does not have any western influences. Instead we use bjembes, mbiras, panpipes, uhadi, etc., to create our music. And the music that they play, the sounds, the instruments, all that has influenced all types of western music," he enthuses.

His students, Lindiwe Topo and Mzwandile Made, feel that their peers and the rest of the University community do not know enough about the genre and the work done in the department to fully appreciate it.

"We are like any other department; we do theory, we cultivate our art and we perform," says Made, a postgraduate African Music student currently doing his Honours.

The Department regularly hosts performances and public lectures in an effort to publicise this particular brand of music, which incorporates music and instruments from sub-Saharan Africa.

"This type of music receives a lot of support from foreigners, but not enough from the local community. Part of the reason is that people think they know everything there is to know about African music, but actually they don't," says Plaatjies.

Made adds that the department is actually preserving a music genre in danger of being obliterated because it is not receiving the attention it needs from the music industry and South Africans.

"People must come to our shows and invite us to perform at theirs; this is music that needs to be heard," he concludes.