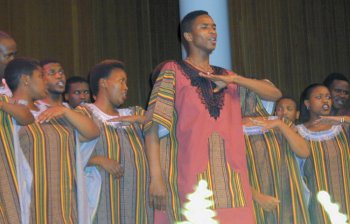 The award-winning Choir for Africa, founded in 1987, is raising funds to take its 50-strong group to perform by invitation in Canada next August.


UCT's renowned Choir for Africa is hard at work on a fundraising drive they hope will take their 50-strong group to the Festival Vancouver 2002 in Canada this August.

The choir has been invited to perform two concerts at Festival Vancouver, the first (A Night in Africa) on August 7 at the Chan Centre for Performing Arts at the University of British Columbia, and the second (part of the Choral Connections Series) on August 8 at St Andrew's Wesley Church in Vancouver.

While accommodation, local travel arrangements and a per diem allowance for 47 members have been provided by the organisers, the choir must cover its own expenses from South Africa to Vancouver, including visas, airport taxes and the like. "We're looking for an official sponsor to cover the R450 000 required," choir chairperson Chupe Serote explained.

"The festival organisers have kindly arranged two private concerts in Vancouver for the choir to help us raise funds," he added. "But it would be very embarrassing if we couldn't raise the funds to get there.

"This is a big opportunity for the choir, the University and the country as only four groups have been invited from Africa and we are the only group performing choral music."

The UCT Choir for Africa was formed in 1987 by George Mugovhani to preserve African musical heritage. It has won numerous honours since then.

If you can assist in any way or have contacts with organisations that can assist, please contact Chupe Serote, email cserote@uctlib.uct.ac.za or tel 650-3102.