The Fantasticks for UCT's Little Theatre 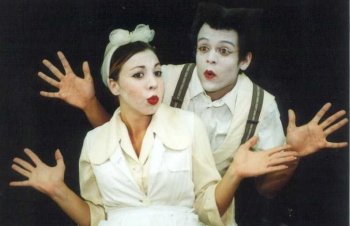 Magical musical: Candice van Litsenborgh as Huckleby and Charles Tertian as Bellamy in The Fantasticks, the debut musical in the UCT Drama Department's Music Theatre Programme at the Little Theatre from May 11 to 18.

The original New York production ran for an astounding 32 years, opening in 1960 and closing earlier this year. Audiences of all ages will be charmed by the musical fable of Luisa and Matt, whose parents scheme to bring them together in a plot to live happily ever after.

With the help of a bandit, two down-and-out actors and an ever-present mute, their happy ending is put in place.

Directed by award-winning Geoffrey Hyland, The Fantasticks is remembered by some of the best songs in the musical theatre canon such as "Try to Remember" and "Soon It's Gonna Rain". The musical direction for the show is by Danie Fourie with choreography by David Fick. The cast includes Mandi Manson and Brennan Holder as the young lovers, with Candice van Litsenborgh and Charles Tertiens as their scheming parents.

There will be seven showings only from May 11 to 18. Booking can be made through Susan Cole on 480-7129 or email scole@hiddingh.uct.ac.za.