University of Cape Town (UCT) marine biologist Emeritus Professor Charles Griffiths and his filmmaker son, Matthew, have drawn on their scientific and artistic talents to produce a series of short educational videos on the organisms and features modern-day strandlopers and rock poolers will commonly encounter while exploring our coastlines.

Most coastal residents have little idea of just how magical these creatures and their habitats are, said Emeritus Professor Griffiths. The Explore the Shore YouTube series features Griffiths introducing Matthew to the idiosyncrasies of the animals and seaweeds that occur along our coastline, and the wonders of their diverse habitats.

Each video is a short inspirational journey of discovery for viewers, designed both to inform and to instil a love of these fascinating natural treasures that lie right on the doorsteps of many South Africans.

Griffiths has studied and worked as a professional marine biologist for over 50 years, studying a wide range of regional habitats and groups. During this long career he has authored over 200 research papers and described over 100 species new to science (and an additional 200 new to South Africa). He is also an author of best-selling regional guidebooks to marine life, freshwater life and insect life.

Star fish and other celebrities

The real stars of these shows, though, are the equally multi-talented and diverse seashore residents. Meet the limpets that assiduously farm the rocks, each guarding and weeding their own algal gardens and then scraping off and eating the crop with their rough tongues. Also, the solar-powered corals stretching up to harness the sun’s energy, and the five-sided, hydraulically operated starfish that uses a water vascular system and hundreds of tubular feet to get around and find food. And then evert their stomachs through their mouths to engulf and digest their prey!

“Each short three- to 10-minute episode provides close-up footage of and describes the unique habits of either an animal group, or some aspect of this hidden world that most of us have never realised was available on our doorsteps,” Griffiths said.

The duo plan to release a new episode every second Thursday and have a list of 50 different topics to film. The resource is free to anyone who subscribes. That includes biology teachers at all levels. It’s a useful marine biology resource, especially for schools far from the coast, said Griffiths.

“We are fortunate to have a sponsor who has been assisting us in covering the costs of producing the first 20 episodes, but we welcome sponsors for the next tranche of Explore the Shore, said Griffiths.

A pinch of family salt

Griffiths’ wife, Dr Roberta Griffiths, is also a marine biologist, so it was perhaps inevitable that their two children, Melinda (also a scientist) and Matthew (a multi-media artist) wouldn’t escape a life attached to the sea – and many experiences of foraging and exploration along the coast.

But their parents took it a step further. Griffiths named a genus of fresh-water shrimp after Matthew (Mathamelia) and Roberta named a spectacular sea slug after Melinda, albeit with a slight convolution of letters (Leminda millecra). Griffiths also named a kelp-boring sea shrimp after his wife (Sunamphitoe roberta) as a birthday gift. He also has several species named after himself, including a genus of shrimps called Griffithsius.

The birth of the series

During a recent seaside jaunt with his dad, Matthew realised what a vast repository of knowledge ambled alongside him. He decided it couldn’t be wasted. Matthew envisioned capturing his dad talking about the marine world in a series of short YouTube videos that were engaging, accessible and informative.

“So, we thought ‘Let’s do this.’” said Griffiths. “We’re the ideal team: we’ve got the person with the right information, we’ve got the filmmaker … It can also be a great legacy thing for the family,” he added.

“Matt and I both realised I have a whole lot of stuff in my head, much of it anecdotal information, which is not suitable for scientific papers, for example, unusual things that I’ve seen animals doing. All that knowledge is going to die with me if we don’t record it.

“It’s crazy how you just keep seeing things you’ve never seen before. But this series is an opportunity to create a permanent record of some of the more anecdotal observations and stories that you can’t use in other ways.”

The pair started out along the Western Cape shorelines and then, on a family holiday to KwaZulu-Natal, began shooting episodes that cover groups only found in the more tropical habitats there too.

“We tried to think about what people are most likely to come across while walking the shoreline and going into the pools and to make sure we covered all of those,” Griffiths said.

“For example, when people go down to the shore, they’re definitely going to see klipfish in the pools, mussels, limpets, kelps and so on … The organisms we cover must be common or conspicuous. There’s no point doing something no one is ever likely to see!”

Fortunately, Griffiths can switch easily from scientist to raconteur.

“I’d love to see these used in biology classes, as it’s a free resource.”

“The whole point is to get beyond the academic audience and to involve and inspire the public, although definitely my students will also learn things from watching the videos, as they contain unpublished information you won’t find anywhere else. They’re also useful for schools, wherever they are in the country. I’d love to see these used in biology classes, as it’s a free resource and a perfect introduction for those who have little experience of sea creatures.”

And audiences can be sure they have an authentic learning experience. Griffiths is concerned about the veracity of much of the popular scientific material that appears on the web.

“A lot of it is very sensationalised, done by gung-ho people who are not showing the natural behaviours of the animals or are handling them incorrectly. They’re also often giving scientifically inaccurate information. We’re trying to make this light and entertaining, but still getting accurate science information in.”

Some of the episodes will feature guests, such as one just filmed about a collector of ‘sea vegetables’ who will demonstrate how she prepares seaweed dishes in her kitchen.

Feedback at this early stage has been very positive, Griffiths said. The emails he loves best are those that go something like, “I’ve lived at the seaside all my life and had never noticed all these incredible animals and the weird ways in which they live.”

And of course, there’s the other family connection.

“We’re going to do an episode on the shrimp that bores into kelp, that’s named after Roberta. We can use that as an opportunity to explain how you find new species and the process of naming them, which is a mystery to most people.”

He added, “You don’t have to go to the Kruger Park to see wildlife. It’s right here on our doorstep; all you need to do is walk across the promenade at Sea Point down on the rocks at low tide to find it – in abundance.” 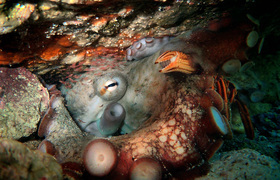 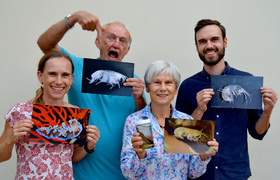