The news that My Octopus Teacher had won an Oscar for the Best Documentary at the 93rd Academy Awards was met with elation in the Cape Peninsula’s Deep South where naturalist, film-maker and co-star Craig Foster lives and freedives. But underpinning the film was his relationship with two University of Cape Town (UCT) marine biologists, Foster’s science and marine tracking mentors.

They are friend and fellow seashore explorer Charles Griffiths, now an emeritus professor in the Department of Biological Sciences, and UCT alumnus Dr Jannes Landschoff, who is listed as scientific advisor on My Octopus Teacher.

Some years before Foster encountered his octopus co-star, he’d learned how to track and understand marine life in False Bay’s rich intertidal region in the company of the scientists.

“But I wasn’t able to speak that science language very well and Charles kindly offered to let me join him and Jannes.”

Foster is involved in the Sea Change Project, a not-for-profit organisation with a mandate to conserve the oceans and human origin heritage. In an interview with UCT News in 2017, Foster recounted how his job as a wildlife film-maker and advocate for the oceans came from his ability to communicate science in “pictures and stories”.

But it was while he was living and hunting with the San that he realised his access to the ecosystem and its biology was very limited.

“They track with sound, so they can find animals kilometres away. Because their hearing is phenomenal and they speak the languages of animals, birds and insects, I felt I was in a silent world and they were in a world of gigantic symphony.

“But I wasn’t able to speak that science language very well and Charles kindly offered to let me join him and Jannes,” he said.

And with Griffiths’s 50 years of scholarship and big-picture thinking, this was immersion of a different kind. The San also taught him that there were no shortcuts to deep connection.

Foster had turned to the sea after suffering a burnout. He learned to freedive; to connect with something greater than himself: the underwater world. By 2017 when he spoke with UCT News, he had been freediving in the sea below his home for six years. It took three years to develop his underwater tracking skills and system, with the help of Griffiths and Landschoff.

“In the first two years I found almost nothing,” Foster said. “And then I started noticing little signs and little tracks. Sometimes you watch incredible behaviour, but you don’t know it’s amazing because you don’t know what it is! And then the different things start to speak to you.”

That happened with the octopus.

It took six months for the female cephalopod to trust him in her predator-dense environment. Eventually she took him on hunting expeditions. From her, Foster learned how to move so that he did not give off pressure waves. Eventually, she allowed him into the front part of her den where he placed a camera. Footage showed her as a rigorous housekeeper, using her siphon to jettison sand and debris that the tide had washed in. Surprisingly, she didnʼt eject the camera that she allowed Foster to place in her den.

What My Octopus Teacher could not include were other scientific discoveries. Griffiths noted that although it was not the film’s focus, the trio discovered “at least half a dozen” species new to science during filming. One of these was a species of shrimp that Foster noticed was cohabiting with the octopus in her lair.

Foster filmed the shrimps, unaware of the scientific implications.

After Griffiths asked him to collect a sample from the den, it was confirmed that the shrimps were new to marine science and the species was subsequently named Heteromysis octopodis. However, Foster found another shrimp in False Bay, also new to science, which was named after him: Heteromysis fosteri.

Griffiths is suitably chuffed with the film’s award, for what had at first appeared to be “a delightful but fairly niche natural history production about the unusual relationship”.

“A connection with the natural world can and does provide us humans with a vital calming and healing experience, and enormous joy.”

“First, experiencing a connection with the natural world can and does provide us humans with a vital calming and healing experience, and enormous joy. Second is that an octopus is an intelligent and sentient organism that experiences a life full of the same problems and desires (obtaining food, escaping danger, procreating and caring for offspring) that we experience. Last, that even here in a large city, the natural world around us is full of incredible experiences and indeed new discoveries.”

The conservation message is loud.

Griffiths is hopeful that the film will be a clarion call for preserving these habitats and “motivating better conservation of the remarkable biota of the Great African Sea Forest, so that it can be enjoyed and marvelled at by generations of Capetonians and their guests to come”.

Landschoff is now working with the Sea Change Project. Speaking after the news broke, he was a little overwhelmed.

“You might imagine things have been a bit crazy here!”

He added: “I’m often asked what implications the film has for science and how I see the movie as a scientist. I find it useful to turn this on its head and ask: What has science done for the film? How much scientific knowledge, fact-checking and, even more so, scientific-based thinking and scientifically informed discussions have created the foundation for a film that showcases extraordinary natural history, inspires millions of viewers, and wins award after award?”

He believes the answers lie between the lines of his own story and involvement in the film and in the Sea Change Project – and a “patient history” of trust built over time. He met Foster in 2014, when he was Griffiths’s master’s student in the Department of Biological Sciences.

“We immediately connected because we both had something the other didn’t have.”

“We immediately connected because we both had something the other didn’t have. Craig was on a mission with one goal. To be nature. I thought he was mad to dive in freezing water without a wetsuit, but I quickly saw what he was doing: to be as close [as possible] to the sea creatures; to be inside nature and not outside.

“Slowly, I opened my eyes to the existence of this ‘inside–outside’ spectrum by witnessing Craig on the inside. The life Craig lived was the embodiment of why I had chosen to become a marine biologist. At this time, however, Craig had never really been very interested in science, and I had never met a person who was so close to the natural world without any kind of scientific training.”

This changed with time, as Landschoff shifted to the “inside”. Griffiths’s and Landschoff’s interactions with Foster and their regular sorties to the intertidal zones also saw Foster adopt a more scientific pattern and approach to his observations and interactions with the marine world. Foster also started reading primary scientific literature.

It was a “coming together of disciplines, the deep authentic human longing to ‘be nature’ combined with the human urge for knowledge, understanding and wisdom”. The film would not have been the same without this fusion, Landschoff said.

Because he believes humans need biological research of nature “probably more than ever”, Landschoff sees the film as a “huge inspiration and reminder”.

That reminder is one to scientists too, he added; to become more emotionally open to research topics, to remember the passion that inspires their work.

“And because nature is fascinating, and the seas are the basis of life. Without them, we don’t exist.” 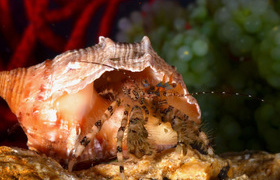