The Everard and Joan MacFarlane Family Leadership Scholarship for University of Cape Town (UCT) law students was launched on Tuesday, 20 July. More than just a funding grant, the R15 million endowment aims to support students who display both academic excellence and leadership skills, through a holistic faculty‑based programme.

Taking the form of a true endowment – the scholarships are funded by interest revenue, while the capital remains untouched – this generous gift was bestowed by three siblings with deep roots in UCT’s Faculty of Law.

The scholarship has been set up in the memory of their parents, Everard and Joan MacFarlane. Their request was that the scholarship name would explicitly note two things: the MacFarlane family name, and the fact that leadership would be a key feature of the programme.

Due to COVID‑19 restrictions, an online launch event was held via Zoom. During the event, Roger said that the scholarship was inspired by the ethos instilled by their father, who from a young age had to work and provide for his widowed mother and elder sisters, during the Great Depression.

“You can succeed even if you have a modest background, through hard work and applying yourself.”

Despite the constraints this put on him, he managed to prioritise education and make a success of himself.

“He left us with three key messages that have affected the creation of the scholarship,” said Roger. “One of them is focusing on the value of education. Secondly, he taught us that you can succeed even if you have a modest background, through hard work and applying yourself. Finally, he instilled in us an idea that he wanted [each of] us to lead in whatever we [could], and be a changemaker.”

This emphasis on driving change was highlighted by Vice-Chancellor Professor Mamokgethi Phakeng during her vote of thanks to the MacFarlane family.

“The word ‘leadership’ in this endowment means a great deal to us,” she said. “At UCT, we want to build not only the ‘head’ knowledge, but also character.

“We want our graduates to be future leaders who will use their minds to create a fair and just society. That is our idea of higher education.”

Dean of the Faculty of Law Professor Danwood Chirwa added to this, saying that they were grateful to be able to offer deserving students an opportunity to further develop their leadership skills, while also receiving funding for their studies.

An inaugural cohort of four students has been selected, receiving R75 000 each.

The Macfarlane Scholars are Jessica Jaftha, Ebrahim Khan, Sabelo Ndlovu and Lwazi‑Lwandile Simelane. All recipients are in the intermediate year of their LLB studies.

As part of the programme, each student has been paired with a senior mentor in the Law faculty to offer them academic support and leadership advice.

Apart from this mentorship, the students will also have the opportunity to participate in a programme of workshops, training and networking that over the two years of the scholarship will build skills beyond law and academic excellence.

While Khan was unable to attend the virtual event, Jaftha, Ndlovu and Simelane all expressed their deep gratitude for the opportunity to participate in a programme that prioritises development of leadership skills.

“In everything I do, I try to embody leadership,” said Jaftha. “When I received the scholarship, it really felt like what I’ve been doing is being seen.”

While the scholarship has helped ease the financial burden resting on Ndlovu’s shoulders, it is really the holistic nature of the programme that excites him.

“It’s not just about the funding, but also the opportunities for networking, intellectual growth and enrichment, and connecting with a mentor.”

“It’s not just about the funding, but also the opportunities for networking, intellectual growth and enrichment, and connecting with a mentor. That has really been the highlight for me so far.”

In recent years, Simelane has found herself struggling to reconcile her passion for social justice with her inability to make changes in the world around her.

After joining UCT’s Global Citizenship Programme last year, Simelane sees this scholarship as an opportunity to take what she has learned and reignite her fire for leading change.

“I appreciate the fact that the scholarship has given me the opportunity to learn how to navigate that in a practical sense, and to network, and to learn how to be a better person in the law.”

The scholarship runs for two years and will be made available on an annual basis to new cohorts of four or five students. 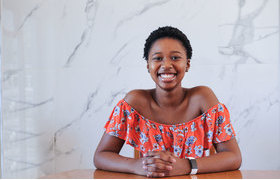 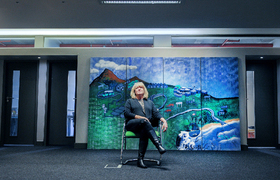