A team of scientists, including those from the University of Cape Town (UCT), have developed a new diagnostic methodology enabling a non-invasive, fast and highly accurate way of detecting tuberculosis (TB).

The new diagnostic pathway called A‑Patch includes nano sensors, which detect TB compounds emitted from the skin. A specifically designed sensor array translates these findings into a point‑of‑care diagnosis by discriminating between active pulmonary TB patients and controls with sensitivity above 90% and 70% specificity.

“This fulfils the World Health Organization triage test requirements and has the potential to become a TB triage or screening test,” said Professor Keertan Dheda, the head of UCT's Centre for Lung Infection and Immunity.

The study, titled “Profiles of volatile biomarkers detect tuberculosis from skin”, was recently published in the Advanced Science journal.

To create a robust tool for TB diagnosis, samples of 320 people in Cape Town and 316 in New Delhi in India were processed and analysed. The study population included newly diagnosed and confirmed pulmonary-active TB cases, healthy volunteers, and confirmed non‑TB cases.

Approximately 95% of TB cases occur in developing countries, including locations where people live on less than one US$1 per day. About one‑third of the world population has latent TB with a lifetime risk of 5 to 10% of developing active TB. HIV co‑infection, smoking and malnutrition greatly increase this risk and speed up the TB epidemic.

Despite advances in TB diagnostics, Professor Dheda said millions of patients continue to receive an incomplete or delayed diagnosis, as the physical signs and symptoms of TB are nonspecific.

Dheda shared: “Two in five TB patients globally remain undetected and thus good community‑based screening tools for TB are urgently required. Many existing diagnostic tests are slow, have low sensitivity and/or specificity, and at times are too expensive or complex for resource‑limited settings.

“For example, a sputum smear is too insensitive, and mycobacterial culture takes four to eight weeks and at least two to three visits by the patient to finalise the diagnosis and begin treatment. This process is time‑consuming, labour‑intensive, requires highly trained technicians, and the method is based on challenging specimen collection and processing, both of which can greatly affect the sensitivity.”

Dheda said the study was a further step toward assimilation of the developed sensor­‑based system to be applied in real‑time at healthcare facilities without the need for expensive laboratory equipment.

“Implementing the sensor array approach into an adhesive bandage is an additional step toward a simple and cost‑effective wearable patch to address the TB epidemic in both developing and developed countries,” he said.

“This platform is expected to provide the foundation for the development of a wide variety of low‑end and high‑end wearable patches that can detect a wide variety of diseases and illnesses detectable by ‘sniffing’ the corresponding skin‑emitted compounds.” 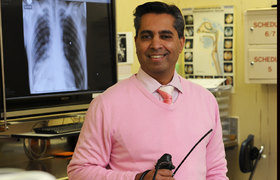