Transmission, infection, disease is the successive cycle driven by Mycobacterium tuberculosis (M. tb) – the bacterium that causes tuberculosis (TB). However, the mechanisms behind the successful transmission of the bacterium have been poorly researched, mainly due to an inability to capture and identify live M. tb in the exhaled breath of TB patients. This is changing – guided by collaborative efforts from researchers at the University of Cape Town’s (UCT) Faculty of Health Sciences (FHS) and the Institute of Infectious Disease and Molecular Medicine (IDM).

As TB Awareness Month kicks off on 1 March, it’s appropriate to remember that it is ranked as one of the deadliest infectious diseases globally. According to the World Health Organization’s Global Tuberculosis Report, which was released in October 2020, Africa hosts 25% of the world’s TB burden, and 3.6% of these global cases are attributed to South Africa – with an estimated 360 000 people in the country having contracted TB in 2019.

Of concern is the fact that fewer than one-third of new M. tb infections can be confidently linked to known TB cases, a deficiency reflecting the effects of the prolonged infectious period of TB and the potential for transmission from transient exposures.

“There is significant power in simply knowing when, by whom and how many M. tb organisms are produced in a community,” said Professor Digby Warner of the IDM.

Working with supervisor, Professor Warner, the researchers performed non-invasive collection of bioaerosol, or exhaled breath, of TB patients in a respiratory aerosol sampling chamber (RASC). They then used fluorescent microscopy, together with a mycobacteria-specific viability probe, to detect and identify live M. tb in the collected samples.

Through this study they demonstrated the ability to detect live M. tb organisms in 90% of TB cases and, moreover, were able to trap the captured organisms for serial microscopic imaging over several days.

“A core motivation of this research was the need to keep bacilli [TB-causing bacteria] alive following detection.”

“A core motivation of this research was the need to keep bacilli [TB-causing bacteria] alive following detection, to ensure the potential that previously inaccessible features such as morphological [shape] and physiological [bacterial replication and metabolism] characteristics of aerosolised M. tb could be investigated. This, to better understand the factors that might contribute to the successful transfer of infectious organisms from one person to another,” Gessner explained.

This pipeline for detecting M. tb offers a uniquely sensitive way to identify who is transmitting M. tb and when, and for understanding what features of the bacterium might be critical to successful transmission.

“Understanding transmission dynamics at this level will aid in targeting interventions to areas that serve as transmission hotspots,” Gessner said.

The hope is that this work might inform better approaches to interrupt transmission. Although it contributes to the anti-TB strategy, this line of action remains mostly underexplored, because of the poor understanding of the events surrounding transfer of M. tb between hosts.

“This technique may also assess the current TB-control strategy, which involves treating passively-identified TB patients to reduce infectiousness. These patients can be tracked over time to monitor the frequency at which they produce infectious bioaerosols and, importantly, to quickly ascertain the impact of anti-TB drug therapy on infectious aerosol release,” Dinkele added.

The RASC was developed by another member of the team, Emeritus Professor Robin Wood of the Desmond Tutu Health Foundation based at the IDM. The “clean room” was designed for the high-efficiency capture of the bioaerosols produced when breathing.

Until recently, the most advanced techniques for the detection of M. tb in bioaerosol samples, with a low bacterial count, were unable to discriminate between live and dead bacteria or shed light on the specific bacterial properties that are essential for surviving transmission.

Dinkele explained that the RASC was modified for the liquid capture of bioaerosols enabling the direct detection of organisms without the need for growing them in a “culture”, to address the shortcomings of the previous restricted detection methods.

“Nevertheless, detecting low numbers of bacteria (<100) in large volumes of liquid (>5 mL) using microscopy was previously unheard of,” he said.

“When a fluorescent probe, specific to live mycobacteria, was developed by collaborators Dr Mireille Kamariza and Professor Carolyn Bertozzi at Stanford University, it opened up the possibility to use sensitive microscopy to find these very small numbers of bacteria in liquid samples.”

As an obligate human pathogen (an organism which infects and is only transmitted by humans), transmission is required for M. tb’s propagation and survival, and understanding it is therefore integral to TB control globally and in South Africa.

“Because transmission is poorly understood and difficult to study, control efforts to date have been based on the treatment of passively identified TB patients upon first presentation at a clinic. That is, treating active disease while simultaneously rendering [the patients] non-infectious,” Dinkele said.

This is dangerous because it means that transmission that happens before treatment is initiated can continue without interruption.

Gessner added: “Moreover, this ignores the potential contribution of asymptomatic transmission – that is, transmission by people who do not feel ill [and thus see no need to seek medical help] – something which is increasingly thought to be a major driver of disease prevalence in high-burden regions, such as South Africa.

“Our work is crucial in providing a foundational understanding of M. tb transmission upon which interventions can be developed to reduce the spread of M. tb.”

This sentiment is echoed in the paper. While novel, the researchers note that this technology is still unable to provide a measure of infectiousness.

“Ascertaining which M. tb isolates go on to infect new individuals and cause TB disease will require innovative approaches toward ʻclosing the loopʼ. This work represents an important step towards this goal.” 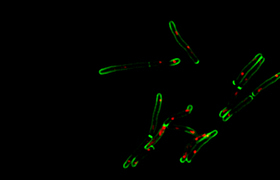 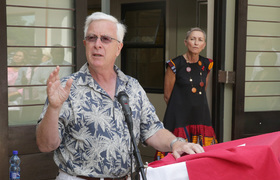