An international multi-institutional study initiated by the University of Cape Town (UCT) involving the scientific and historical analysis of elephant tusks found in the cargo of a ship wrecked off Namibia in the 16th century revealed some “remarkable” findings.

With the help of advanced scientific methodology, the team has been able to shed light on the origins of the more than 100 tusks recovered from the 487-year-old shipwreck – the oldest known shipwreck in southern Africa and the largest archaeological cargo of African elephant ivory yet found. The first report on the findings was recently published in the scientific journal Current Biology.

The team of researchers includes Professor Shadreck Chirikure, the head of UCT’s Archaeological Materials Laboratory, and Professor Judith Sealy, the director of UCT’s Stable Light Isotope Laboratory in the Department of Archaeology. Other participating institutions include the University of Oxford in the United Kingdom and the University of Illinois in the United States.

In 2008 diamond miners working along the coastline of Namibia discovered the remains of a Portuguese trading ship, later identified as the Bom Jesus. The ship was part of a “treasure fleet” heading for India, carrying precious cargo to trade for spices, silks and other luxury goods. The Bom Jesus didn’t reach her destination – she was wrecked in 1533 just north of the mouth of the Orange River.

Over 40 tons of valuable cargo were recovered intact from the wreck, including thousands of copper, lead and tin ingots, as well as gold and silver coins.

“This is an amazing snapshot of how connected the world was by the 1530s.”

But according to researchers, this was not all. The most fascinating find recovered from the Bom Jesus was a collection of more than 100 elephant tusks. The tusks varied in length and size and ranged in weight from 2 kg to 33 kg. The elephants were both male and female – young and old. Most tusks were in good condition, which researchers suspect was thanks to the icy waters off the coast of Namibia.

“This is an amazing snapshot of how connected the world was by the 1530s,” Chirikure said.

Professor Sealy said Chirikure approached her to discuss whether stable isotope analysis – analysis of the nonradioactive isotopes that occur naturally in all living organisms – might help to establish the origins of the shipwreck ivory. Dr Ashley Coutu from Oxford then joined UCT’s Stable Light Isotope Laboratory to work as a postdoctoral researcher under Sealy’s guidance. Coutu’s PhD research covered isotopes in East African ivory, an “excellent” background for this project.

“Through Ashley’s network, contact was made with the Genomics Research Lab in the Department of Animal Sciences at the University of Illinois,” Sealy said.

Research indicates that only four of the 17 genetic lineages still exist today, a stark illustration of the loss of more than 95% of the elephants in West Africa as a result of hunting and habitat destruction.

A range of habitats

Stable carbon and nitrogen isotope analyses carried out at UCT established that the elephants lived in a variety of habitats, but not in deep forests. The researchers found this “surprising”, given that the tusks came from the forest species of African elephant.

While this species is still found outside the deep forests today, wildlife biologists thought they had taken advantage of vacant spaces opened up by the devastating decline in elephant populations in the last few centuries. The results from the shipwreck ivory demonstrate that the two species of African elephant have been sharing savanna habitats in West Africa for centuries.

circulation, and they emphasise the importance of protecting southern Africa’s maritime archaeology heritage.”

“The results also provide insights into the history of global commodity circulation, and they emphasise the importance of protecting southern Africa’s maritime archaeology heritage,” Sealy said.

Elephant tusks are the source of ivory, which was a valuable commodity in the 1500s and would have been used to make jewellery, mirrors and combs, decorative items and religious objects. The ongoing demand for ivory through the centuries has reduced the elephant populations in Africa from approximately 26 million animals in the 1800s to fewer than one million elephants today. Despite a global ban on ivory sales in 1989, the ivory trade continues illegally, and an estimated 20 000 elephants are killed on the continent annually. 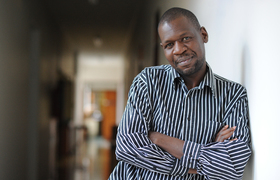