Men, gender equality and the search for gender harmony

Persuading men to participate more meaningfully in transforming gender relations is essential to shifting attitudes and behaviours linked to the “patriarchal dividend”.

The term “patriarchal dividend” was coined by Australian sociologist Professor Raewyn Connell to describe the benefits that accrue to men from women’s inequality. These include higher income and status, respect, access to institutional power and control over their own lives.

But these dividends come with costs. They prevent societies from optimising their human resources, and they impose on men expectations which ultimately limit them as people while making broader societal equality and harmony impossible, said University of Cape Town (UCT) gender scholar Dr Robert Morrell.

Dr Morrell was in conversation with UCT News ahead of the annual 16 Days of Activism against Gender-based Violence campaign. This runs from the International Day for the Elimination of Violence against Women on 25 November to Human Rights Day on 10 December.

Morrell is the director of UCT’s Next Generation Professoriate (NGP) initiative and manages the New Generation of Academics Programme (nGAP), both of which operate from the Office of the Vice-Chancellor. These are transformation projects to nurture young and mid-career black and female researchers.

He is also an internationally recognised gender scholar whose research has focused on violence, masculinities and schooling. He serves on the ministerial task team for gender-based violence in universities, established in May last year by former Minister of Higher Education and Training Naledi Pandor.

Including men in broad gender work – from violence against women to education and gender equality – is essential to improving gender relations and avoiding the “adversarial binary” that obstructs transformation, said Morrell.

In doing so, it’s also important to explore the different forms and expressions of masculinity. Not all are associated with violence, aggression and domination in their expressions – and not all are toxic.

“We have an opportunity to move beyond these roles and enrol men more fully into all spheres of life.”

“There are multiple masculinities, and these have changed over time,” he said. “Understanding the multiplicity of male identities allows us to demonstrate that men have both a destructive and constructive role in society. We know a lot about the destructive role of men; male violence against women is unfortunately widespread, but so is the violence of men against other men.

“Men need to be understood as both victims and perpetrators of violence, but we have an opportunity to move beyond these roles and enrol men more fully into all spheres of life.”

This work has already begun, Morrell said. For nearly 30 years, for example, a global movement has been encouraging men to be more involved with children – from conception to birth and beyond. Paternity leave is encouraging men to be more involved, and men are gaining themselves from learning to be loving and involved fathers. It’s a salient factor as the country takes part in the 16 Days of Activism, he noted.

“We’re not going to encourage men to participate in the campaign by describing masculinity as essentially bad and that all men need reformation.

“Many of our interventions don’t do enough in the area of affirming that men need to be included fully as people and not just as people who have something to renounce or apologise for.”

In seeking gender equality, there is a danger in setting women against men, or one interest group against another. It may be more fruitful to seek to create gender harmony and avoid driving the wedge between genders even deeper.

“Too often we work in a zero-sum circumstance that men and women are pitted in an adversarial struggle,” he said.

Subtle changes in gender transformation indicate that progress is being made, albeit slowly. Over the past 20 years, there have been significant changes in the gendered patterns of schooling, for example. Boys are now dropping out in larger numbers than girls, and the grades of girls no longer lag in high school as they once did. Girls are now in fact outperforming boys. Increasingly, young women are being accepted in greater numbers into higher education than young men.

“Boys have been falling steadily behind, often dropping out.”

Morrell said that recent studies by Dr Nic Spaull, a senior researcher in the Department of Economics at Stellenbosch University, and his associates confirmed the trend.

“Boys have been falling steadily behind, often dropping out. This has implications for them and society. While it’s difficult to fit this scenario into a familiar gender frame which focuses on the subordinate or inferior position of girls and women, this is clearly a gender issue.”

Much of the early gender work focused on girls’ and young women’s poor performances in science, engineering and mathematics and school dropout rates, often because of pregnancy and early marriage, for example.

“When the first study showed that the rate of boys dropping out of schools at secondary level exceeded that of girls, it was totally counterintuitive,” said Morrell.

It also shows up as a global higher education problem: young women are overtaking young men in both access and performance.

But in this reversal lies a larger complication for gender dynamics.

“It’s a problem for any child not to complete their education. There are implications for life trajectory, for earnings, for the growth of the economy, for a responsible and engaged citizenry. Poor educational outcomes are bad for men. And they stack heavily against social expectations of men as key household providers,” he said.

“So, you’re setting up a gendered scenario where men will not be able to fulfil domestic expectations.”

And in South Africa the propensity for frustration and anger to be expressed in gender violence is high.

What’s needed is a more equal distribution of power, income and labour sharing in the home and workplace.

Morrell continued: “A lot of gender work focuses on gender roles and gender norms. And the idea is to produce movement away from control, towards sharing and equality. And it’s true to say that there is resistance to that from some men when they can see no benefit in it for themselves.”

Gender interventions must make the case that men will benefit from gender transformation.

“The trend in the global north has been the emergence of dual-income families where women may earn less than men, but often earn more. And you’ve got a situation where a nuclear family does not consist of just a male provider, a wife and children, but now consists of a much more equal domestic arrangement. The ‘new man’ is involved in a range of domestic chores, childcare and parent care and not locked into paid work and his career as before.

“The man also benefits because it opens a new and expanded understanding of himself and what he’s capable of.”

“I myself have argued the case that in the area of child rearing, there’s a lot of joy to be had from being a participating parent; the children benefit, as do the mother, the grandmother and whoever else is involved in childcare.”

“The man also benefits because it opens a new and expanded understanding of himself and what he’s capable of, regardless of how much money he or the household has.”

We should take hope from this, he said.

But change, especially relational change, is not easy; change is often painful. It takes time.

“We’re also living in challenging times. Many people live in precarious circumstances. In those situations, it’s difficult for men who still feel the expectation of being the provider to enter a compact of equality with women.”

“Essentially, people need one another; they need to support one another across gender, race, age and religion.”

But with the 16 Days of Activism campaign here, we should not lose sight of race- and gender-based violence, where the costs are primarily, but not exclusively, borne by women.

“Essentially, people need one another; they need to support one another across gender, race, age and religion. We live socially, and to separate men out makes it difficult to assume a programme of collaboration.”

South Africa, with its Constitution, gender policies and practices, scholarship and strong NGO sector, has made laudable progress.

“Does that mean we solved those things? Very, very far from it. We need to provide mechanisms that can stop people from bullying and hurting others in gender and sexual terms. A lot more energy should go into promoting gender harmony: how people live together across differences.

“People respond better to calls to be positive, loving and constructive than they do to repressive mechanisms that are finger wagging and punitive.” 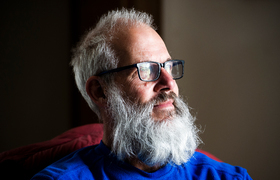