A team of researchers from the University of Cape Town (UCT) and University of the Free State (UFS) has achieved a remarkable feat in the field of structural biology by determining the structure of an enzyme that could be a key component in producing valuable commodity chemicals in greener, sustainable processes.

Known as cytochrome P450 reductase (CPR), the enzyme has received much attention – not only for its ability to perform difficult chemistry, but also for its role as drug target.

“The task was enormous,” said team member Naadia van der Bergh, a PhD student in UCT’s Centre for Bioprocess Engineering Research (CeBER). “CPR is a massive enzyme. It contains 679 amino acids and there were two molecules in the asymmetric unit. Added to that, our initial structure was determined and solved on the basis of a low-resolution map. Interpreting this structure was a truly gruelling effort.”

The results of the research were published on 27 December 2019 in the journal Scientific Reports (9:20088) by the Nature Publishing Group.

With support from the Global Challenges Research Fund’s (GCRF) Synchrotron Techniques for African Research and Technology (START) programme, the team was given the opportunity to conduct parts of their research at the Diamond Light Source synchrotron in Oxfordshire in the United Kingdom (UK).

This aligns with the programme’s aim of building partnerships between world-leading scientists in Africa and the UK, effectively providing training for the next generation of researchers in structural biology.

“The field of structural biology, which is a major field abroad, is underdeveloped in South Africa and doing the work requires major challenges to be overcome,” said Professor Trevor Sewell, leader of the START bioscience project in South Africa.

“The structures of very few enzymes have been determined in South Africa, which makes this achievement one truly worth celebrating.”

As the demand for “greener” chemical processes increases, he noted, enzymes are becoming more and more important in chemistry research.

While this achievement is remarkable in itself, it is notable that it was made largely by a team of women scientists who had to juggle family and work responsibilities with conducting their research.

Van der Bergh shared how she’d often have to work on the project into the early morning hours, after putting her young daughter to sleep and wrapping up any leftover duties from her full-time job.

“Giving up seemed a real option at times but I am glad I persevered, with lots of encouragement from Prof Sewell,” she said. “He has shown me by sincere example that there are amazing male scientists who really support young women to achieve great things in science.”

Also forming part of the team was Professor Sue Harrison, director of CeBER and Deputy Vice-Chancellor (DVC) of Research and Internationalisation at UCT.

“Prof Harrison went before us in a big way,” said Van der Bergh. “She took up a job at the Department of Chemical Engineering, pregnant and with no female toilet in the building, and today she is UCT’s DVC.”

“I am excited to see more young women entering structural biology, and grateful to GCRF and Diamond for their invaluable support,” said Opperman.

Sewell said: “The world is not short of women role models, but it is important that South African women perceive this and that our country does not perpetuate chauvinistic, male domination of science in this (for us) newly developing field.

“We encourage young women to learn more about structural biology specifically,” he added. “We have a great young team in South Africa – Lizelle Lubbe, Melissa Marx, Lauren Arendse and Lenye Dlamini at UCT, Carmien Tolmie at UFS, Thandeka Moyo and Penny Moore at the National Institute for Communicable Diseases, and Sylvia Fanucci at the University of the Witwatersrand – in addition to Naadia and Ana.

“It’s a powerful group of people who are being supported by START.” 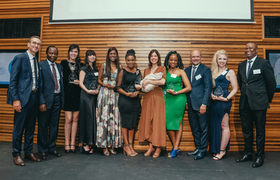