Academics from the University of Cape Town (UCT) are part of a research group led by the University of Oxford’s Department of Physics that has observed a black hole ejecting material at close to the speed of light out to some of the largest angular distances (separations) ever seen. These observations have allowed a deeper understanding of how black holes feed into their environment.

The research group focuses on studying transient astrophysical systems – things that change brightness on short timescales. The system studied in this instance contains a dynamically confirmed black hole within our galaxy and another star (not too dissimilar from our sun) orbiting one another.

The black hole, due to its strong gravitational pull, syphons material from its companion star and accretes (accumulates) it. “Most important to this work is the fact that the material is not all lost into the black hole. Outflows are launched away from the black hole at extreme velocities – almost the speed of light – and can be observed with radio telescopes,” said Joe Bright, a DPhil student at Oxford University’s Department of Physics.

The group in Oxford, along with international collaborators, led an extensive observing campaign on this particular system, known as MAXI J1820+070 after it went into outburst in the summer of 2018.

“This in itself was remarkable as this type of transient astrophysical system mostly accretes a very small amount of material and so can’t be seen; they do however occasionally go into outburst and only then are they observable,” said Bright.

“We were able to observe the system launching ejections of material.”

“Our campaign included telescopes in the United Kingdom, America and the newly operational MeerKAT telescope in South Africa. With these facilities we were able to track the connection between accretion and outflows. More excitingly we were able to observe the system launching ejections of material, and to track these ejections over a wide range of separations from the black hole.”

The group continuously tracked these ejections successfully to extreme distances from the black hole with a range of radio telescopes, and the final angular separation is among the largest seen from such systems. The ejections are moving so fast that they appear to be moving faster than the speed of light, but they are not. This is a phenomenon known as apparent superluminal motion.

Co-lead of the project, and author on the paper published in Nature Astronomy, Rob Fender (Oxford, and visiting SKA professor at UCT’s Department of Astronomy), said, “We’ve been studying these kinds of jets for over 20 years and never have we tracked them so beautifully over such a large distance. To see them so early on in the operation of a new facility like MeerKAT is fantastic, and – as is often the case – teaches us not to confidently predict what we’re going to see in the future."

“We’ve been studying these kinds of jets for over 20 years and never have we tracked them so beautifully.”

Professor Patrick Woudt, head of the Department of Astronomy at UCT and co-lead of the ThunderKAT project on MeerKAT, said, “These observations demonstrate the incredible power of the MeerKAT radio telescope array in South Africa. An important aspect of this research is to deal efficiently with the tremendous data flow from MeerKAT (and in the future the Square Kilometre Array) so that our students can analyse the results quickly.

“This is particularly important in time-domain astronomy where the brightness of an object in the sky can change very quickly and observing campaigns are adapted dynamically to cover these rare events. The IDIA* cloud-based research infrastructure has played an essential role in the quick analysis of the MeerKAT data in this regard.” 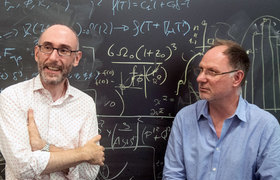 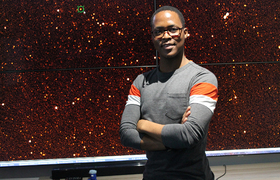