A new window on the universe

UCT is part of a consortium that is taking astronomy to greater heights with the launch of the new optical telescope, MeerLICHT, on 25 May.

This new and fully customised 0.65 m optical telescope has an enormous field of view, matching that of MeerKAT. But this isn’t all that makes MeerLICHT unique. The telescope is fully robotic and will be paired with the MeerKAT radio array after it too starts its science operations.

Together, MeerLICHT and MeerKAT will provide a new and improved window on the universe.

Six years ago, after a workshop in Oxford, Professor Patrick Woudt and a colleague discussed how best they could follow up on discoveries picked up in data from radio telescopes.

“This telescope is quite unique in its design. It was designed to always co-stare with the MeerKAT radio telescope.”

“And the answer to that question, over a pint at the pub, was: ‘Well, we must build our own [optical] telescope that is actually fully dedicated to doing that.’”

A dedicated optical telescope being paired to a radio array was an entirely novel concept.

The project kicked off in earnest after Woudt applied to purchase the core piece of technology, the detector, through UCT.

The purchase was approved, prompting Woudt’s partners from Radboud University Nijmegen in the Netherlands to respond in kind. The partner university committed itself to funding the design and construction of the telescope, with support from the Netherlands Organisation for Scientific Research (NWO).

The development and design of MeerLICHT fits into a larger telescope design project. It forms the precursor for an array of three telescopes due to be placed in Chile, and mandated to search for counterparts to gravitational waves.

The MeerLICHT prototype was built in the Netherlands and brought over to South Africa in July of 2017. It is made of carbon fibre, to ensure that it is stiff enough, but will not expand or contract when faced with the large temperature variations in the Karoo. The telescope incorporates elements of green computing to ensure that it is able to run in environments without an abundance of electricity.

This telescope is housed at the South African Astronomical Observatory (SAAO) facilities at Sutherland. The SAAO saw to it that an available dome was automated, so that MeerLICHT could be operated remotely and automatically once paired with the coordinates of the MeerKAT telescope.

But designing a new telescope is a costly exercise, so the team reached out to colleagues across the globe. In exchange for funding, the MeerLICHT team offered access to the telescope’s vast data stream.

In the end, the project was championed by seven institutions: namely UCT, the SAAO, Radboud University Nijmegen and the NWO, and the universities of Amsterdam, Oxford and Manchester.

The project was truly an international affair, with the design and assembly taking place in the Netherlands, the camera’s electronics being done in the United States, and the integration into a cryostat cooler – at minus 200 degrees Celsius – being done in Belgium, before the telescope was transported to South Africa.

MeerLICHT, meaning ‘more light’, is distinct for a number of reasons.

Firstly, the telescope has an enormous field of view at 10 500 by 10 500 pixels. This means that it is able to focus on, and capture data from, a larger portion of the southern sky. The telescope also outputs this data faster than ever before. Each 60-second exposure is processed in just seven seconds.

Not only is this essential to maximise productivity and efficiency, it allows researchers to produce a rapid time sequence of the night sky. This study of smaller time segments becomes possible as researchers grow in their experience and in access to improved computing power.

“We are in an era of astronomy where we are dealing with very large data volumes.”

It is these rapidly varying phenomena that Woudt and his UCT colleagues are interested in.

“There are some detectors that can measure a millisecond of variability, but never over such a vast area,” he said.

This pairing of radio and optical telescopes, both with a wide field of view, is important for a number of reasons.

“One of the things that’s very exciting in the radio observations – people have discovered things called fast radio bursts. These are things that only last ten milliseconds. They happen somewhere in the sky and they don’t recur.”

Should you not be recording a piece of sky when a radio burst happens, you will have missed it.

It is not yet clear how and why these radio bursts occur. With a larger field of view, and a 24/7 stream of data being captured, researchers have a greater chance of both capturing these bursts and investigating them further using data from the optical telescope.

“Certainly, if we can overlay radio with optical, we can start to do some source association, and really try to understand the correlations between these two different windows on the universe.”

“We know they are at large distances, but we don’t know exactly how and where. So, by linking this telescope to the radio, we can try to understand these very fast time phenomena, and discover something new about the universe.”

The linking of radio and optical data will also help researchers make links between various phenomena, some of which are traced by the radio, and others by optical.

“By studying their correlation, we can see how these phenomena link … and that helps to address some outstanding questions in astrophysics.”

An era of big data

We are in an era of astronomy where we are dealing with very large data volumes, explained Woudt.

“About five or six years from now, there will be an optical telescope that will map the entire southern sky every two days, and every night it will find a million transients – a million new objects. So, how do you deal with that information flow? What are the important objects in there? What do you select for follow-ups?”

“This project, although on a much smaller scale, will start to address some of those answers.”

Given UCT’s expertise in dealing with data flow, the institution’s key role in MeerLICHT is in managing its influx.

The MeerLICHT data pipeline was formulated by PhD student Kerry Paterson, and is now ready for injection. Data will stream into the Inter-university Institute for Data Intensive Astronomy (IDIA), at UCT, for analysis.

The team is investigating the possibility of making use of algorithms and machine learning to help sift through this deluge of information.

But MeerLICHT forms part of a greater context. The new telescope is linked to MeerKAT, which is South Africa’s pathfinder toward the Square Kilometre Array (SKA).

“MeerKAT will eventually be incorporated into the mid-frequency component of the SKA,” said Woudt.

Although MeerLICHT does not affect the timeline of MeerKAT and SKA, “it enhances the science we can do with them, by adding an extra dimension”.

“Certainly, if we can overlay radio with optical, we can start to do some source association and really try to understand the correlations between these two different windows on the universe.

“If it turns out to be extremely valuable ... If it turns out we are finding many fast radio bursts and can identify the host galaxy, and report that to SALT [South African Large Telescope], and get a distance for these objects, and so on, then we should of course continue this into the SKA era.” 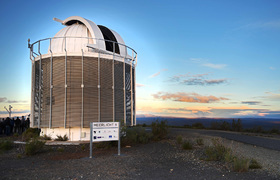 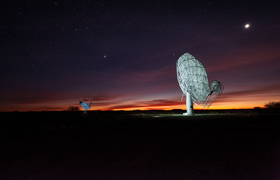 Research and innovation
Preparing for the SKA data 02 Jan 2018 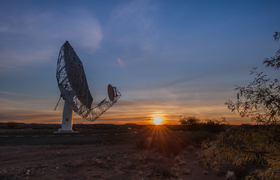 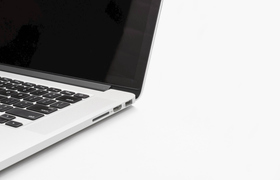