Developing some of the most beleaguered economies in the world doesn’t rest solely with reducing unemployment and breaking the cycle of inequality; the environment has a massive part to play too.

His research focus area homes in on economic questions around the interaction between protected areas and adjacent communities. He pointed out that economic role players the world over tend to prioritise people-centred objectives like poverty and inequality.

Yet, he said, nature conservation and the environment are not prioritised equally.

“Economics is important, and we need to talk about it, even though my main interest is around nature and the environment,” he quipped.

“Suppose you had half-a-million rand; how would you spend the funds?” Muchapondwa asked the audience.

He limited the spending options to two activities, and an overseas holiday wasn’t one of them. Instead, he asked attendees to choose whether they would spend the money on a youth unemployment reduction programme or installing waterholes at a national park.

“[Most people] would think youth unemployment is a major problem and doing something to solve it would take precedence. But think about it carefully.”

“[Most people] would think youth unemployment is a major problem and doing something to solve it would take precedence. But think about it carefully.”

If installing the waterholes will provide water to roughly 100 elephants that would otherwise have crossed a village in rural Limpopo to get their water, and in the process ruined the crops used to feed about 1 000 people, should the youth unemployment reduction programme still be the most popular choice, he asked.

“Think about it, without the waterholes there will be destruction to crops. But with the waterholes, the villagers’ source of [sustenance] will be saved. Therefore, it is important for those who work in the environmental sector to show the relevance of other economic issues [such as this one].”

Environmental goods and services include the air we breathe, recycled nutrients in the soil, and even the weather we’re exposed to every day, Muchapondwa explained.

“These are important services; they come from the environment and should not be ignored. Economists should know that the environment produces goods and services which will help satisfy the wants of people.”

He told the audience that treasuries and finance ministries in developing nations around the world are fixated on the formula for reducing poverty and inequality, and growing gross domestic product (GDP). Almost all the time, the measures they come up with to get this right are “devoid of nature”.

“Poor households depend heavily on environmental and natural resources. Nature is making a huge contribution [to the way they live their lives].”

He encouraged economists to think differently.

“Poor households depend heavily on environmental and natural resources. Nature is making a huge contribution [to the way they live their lives]. This means nature tends to help poor people more, so it is important to invest in it. There are many unreported and unrecorded contributions already made,” he said.

Government has a role to play

He urged national treasuries and finance ministries to think less about the dollars, or rands and cents when making decisions about resource allocation, and more about the environment and the role it has played and continues to play in various sectors.

“Conservation has a meaningful and inevitable role to play, and government must play its part and allocate the necessary resources to this sector,” Muchapondwa said. 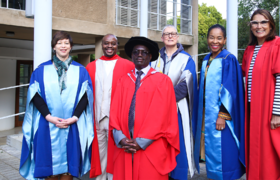 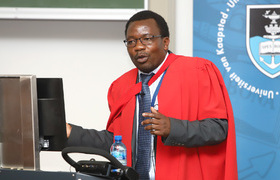