The University of Cape Town’s (UCT) Professor Mark New, director of the African Climate and Development Initiative (ACDI), has been listed among the world’s 100 most influential people in climate policy for 2019.

The Climate 100 list of politicians, civil servants, academics and activists comes courtesy of global network Apolitical, and is drawn from hundreds of nominations from experts and leading organisations. The aim is to recognise high-profile advocates whose work is indispensable to raising awareness and demanding change in respect of climate policy.

New, the citation says, is the director of the ACDI and professor of international development at the University of East Anglia in the United Kingdom.

“His research career spans over 20 years, with a focus on detecting climate trends, climate modelling and assessing the impact of failed climate mitigation policy.

“His research career spans over 20 years, with a focus on detecting climate trends, climate modelling and assessing the impact of failed climate mitigation policy.”

The list, which is separated into Top 20, Youth, Politics and Government, Academia and Advocacy, and International and Non-governmental Organisations categories, “comes at a time when young people everywhere are marching to demand action on climate”, the network said.

“It’s more important than ever to celebrate and support those with the most power to act: the people driving tangible policy change.”

Last year New won the Piers Sellers Prize, one of two annual awards made by the Priestley International Centre for Climate at the University of Leeds in the name of the renowned climate scientist and former NASA astronaut, for his world-leading contribution to solution-focused climate research.

He also helped bring more than 1 000 scientists, practitioners, business leaders and policymakers from 87 countries to Cape Town for Adaptation Futures 2018, the fifth in the Adaptation Futures international conference series on global adaptation, held for the first time in Africa. 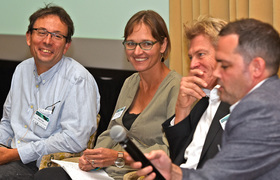 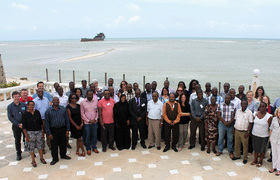