Naledi Maponopono became a mother in her honours year. As a postgraduate student in African languages and literature studies at the University of Cape Town (UCT), she was also a member of the Students’ Representative Council (SRC) and a student activist at the time. Not an insignificant job description.

Now a Master of Arts in African Languages candidate, chairperson of the Subwardens Association, the deputy provincial secretary of the Young Communist League Western Cape, and mother to a baby boy, Lubanzi, Maponopono has become even more adept at juggling demands and responsibilities.

The meaning of Lubanzi’s name has a special significance for his parents; it comes from “Lubanzi louthando lusinike yena”, which means he was born out of a great deal of love, she said.

Fortunately, she is not the only student in the family. Lubanzi’s father, Asive Mpondo, is an aspiring electrical engineer who is completing his studies at Northlink College Westlake Campus.

“His dreams were slightly delayed by fatherhood when he had to become a full-time dad, but he is a hands-on father and 100 percent supportive,” Maponopono said.

However, it became harder for her to work at home as Lubanzi grew.

“The smallest sound he made was distracting, even though he was with his dad, and safe. But I always felt the urge to get up and check if everything was okay.”

While the UCT Educare Centre is a great resource for parents on campus, Lubanzi is still on the waiting list and has been since his mother fell pregnant. Fortunately, the couple now have help in the form of a daily childminder so Mpondo can complete his studies too.

Maponopono’s story begins in Khayelitsha, where she was born and faced tragedy at a young age. When she was 12, her father was murdered for a cellphone there, and the family moved to Westlake in Tokai.

She has nothing but praise for her own mother, Dudu Maponopono.

“She raised me as a domestic worker, but she made sure that I got to attend Westerford, [one of] the top state school[s] in the country.”

“She raised me as a domestic worker, but she made sure that I got to attend Westerford, [one of] the top state school[s] in the country. Iʼm now a two-time (soon to be three!) graduate from the number one university in Africa.”

Maponopono has been an active member of the South African Students Congress (SASCO) since she started at UCT, and during the Fees Must Fall peak in 2015 she was SASCO’s provincial secretary.

In 2014 she graduated with a Bachelor of Social Science, majoring in public policy and administration, sociology and isiXhosa language and literature studies. She registered for a postgraduate law degree the following year.

But it wasn’t what she wanted to do. In 2016 she took a break from her studies and worked for the National Department of Public Works. In 2017 she returned to UCT to pursue an honours degree in African languages. In the same year she was elected as an SRC member heading the postgraduate students’ portfolio.

Her stint on the SRC gave her invaluable insights into how student parents struggle to keep so many balls in the air. She dealt with many such cases, Maponopono said.

There are several things UCT can do, she suggested. Most urgent is a pregnancy policy to acknowledge that students do fall pregnant at university, or arrive pregnant or as young parents.

“This issue is gendered in the sense that it is women who bear the brunt of falling pregnant, without the necessary support. When their children fall ill, or they miss class because of clinic dates, there is no policy to protect them.

“Without this policy, students don’t get the necessary support in residences and faculties and the topic is made to seem taboo. As a result, students don’t perform well and eventually drop out,” she cautioned.

Housing is also a crucial issue. There is only one family residence at UCT and that too has a long waiting list. More capacity is needed, said Maponopono.

“Support” is a word that features prominently in her advice for other student parents or expectant students on campus.

“Ensure that your support structures are intact. Manage your time properly once the baby comes because you have got to spend enough time with your child as well as excel in your studies. Always do what you can and take care of yourself too. It is possible to excel academically and be a parent if you have the necessary support.”

“Manage your time properly once the baby comes because you have got to spend enough time with your child as well as excel in your studies.”

The narrative around gender and parenting is also changing.

“Parenting over the past few years has become dynamic and the gender roles will eventually fade,” said Maponopono.

“My relationship with Lubanziʼs dad is proof of that. There are no gender roles and we both parent equally.”

Her goal is to be the best role model possible for Lubanzi.

“I want to ensure that he has the best opportunities in life and does not grow up in poverty like I did. This is why I work hard, to ensure that, as my mom did for me.”

In June Lubanzi will be a year old, an important milestone for all. Right now, he is intent on mastering the complex coordination and balance required for walking and talking ­– a learning game all his own. 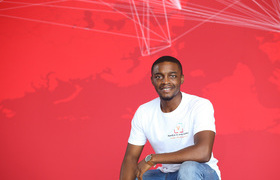 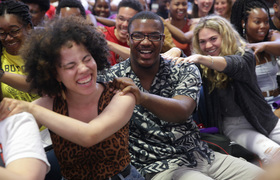 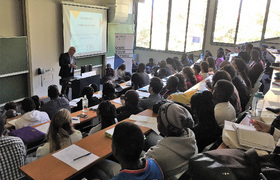