During National Water Week this week, the University of Cape Town’s (UCT) African Centre for Cities (ACC) released a new paper which warns that the Cape Town drought has powerful climate-change adaptation lessons for other South African municipalities.

Titled “Unpacking the Cape Town Drought: Lessons Learnt”, the paper by Gina Ziervogel, an associate professor in the Department of Environmental and Geographical Science, is aimed at ensuring that these lessons will serve to inform other municipalities addressing the issue of drought and water insecurity.

Commissioned by the Cities Support Programme within the National Treasury, the paper reflects data collected from interviews with senior officials and experts who were intimately involved in the drought response. The information is then distilled into 12 lessons across four areas of action: strengthening governance; improving data, knowledge and communication; taking a systemic approach; and building adaptive capacity.

The research also revealed the complexity of urban governance, illustrating how something that initially appears to be an environmental concern in fact impacts on all aspects of city life, including economic opportunities, politics and social dynamics, among others.

This means, said Ziervogel, that different actors need to be involved in responding to a city-wide event, both within the city, between different spheres of government, and with citizens.

But she cautioned that local government in Cape Town – and most other cities – does not have the adaptive capacity to respond flexibly and comprehensively enough.

“New ways of working are needed that build capacity to deal with these problems. Central to this is the ability to strengthen collaboration across actors and draw on robust data and expertise to inform decisions.

“Climate change adaptation cannot be the responsibility of one actor alone. We saw Cape Town avoid ‘Day Zero’ due to the remarkable collective achievement of halving water consumption. This could only have been achieved through both changing citizens’ and businesses’ water-use behaviour, along with the numerous water-demand management measures implemented by the city.”

Ziervogel advocates for a change in attitude from relying solely on local government to recognising that everyone needs to play a role in reducing climate risk.

While the paper uses the Cape Town drought as a case study, it also speaks to the wider issues of how a city responded to a widespread climate shock, including highlighting areas that need strengthening in the bid to build more resilient, well-adapted cities.

The research forms part of Ziervogel’s interest in how to adapt to climate variability and change while ensuring that social and economic development needs are still prioritised.

“In the context of South Africa, with high levels of inequality and informality, basic needs [must] be urgently addressed,” she said, adding that if these responses don’t take climate change into account, they are likely to be undermined.

For example, if low-income housing developments are built on a flood plain without consideration of ventilation and how hot they might get, residents will be negatively affected.

“Many of these residents are also unlikely to have the insurance to deal with flood impacts and will battle to pay the price of health costs,” Ziervogel warned.

Cape Town, she stressed, is a good example of how a city responded to a widespread climate event that impacted differently on high- and low-income households. 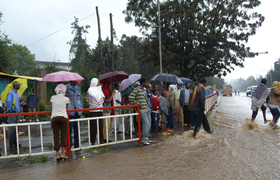 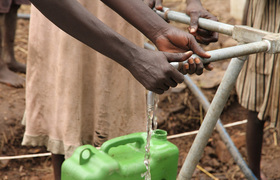