Two southern African cities already have tangible results to show for their work with a research project led by the University of Cape Town (UCT), which spans the entire sub-continent and is focused on preparing cities in the region for the realities of climate change.

Extreme weather is becoming more common in southern Africa, from heat waves and severe droughts in Cape Town and Gaborone, to record floods in Johannesburg and Maputo. Southern Africa is also warming faster than many other regions, presenting increased risks for African populations and infrastructure.

The Future Resilience for African Cities and Lands (FRACTAL) project, under the leadership of UCT’s Climate Systems Analysis Group (CSAG), has presented an opportunity for researchers and municipalities to join forces to explore ways in which to make African cities more resilient.

Among the tangible results already seen thanks to engagement with the FRACTAL team are decision makers in Windhoek developing a city-specific climate-change strategy and action plan, while efforts are under way in Lusaka to co-produce policy briefs on water and sanitation issues relevant to the city.

FRACTAL’s researchers work in nine sub-Saharan Africa cities. Other than Windhoek in Namibia and Lusaka in Zambia, these are Maputo (Mozambique), Blantyre (Malawi), Gaborone (Botswana), Harare (Zimbabwe), and Cape Town, Johannesburg and Durban in South Africa.

While each of the cities is unique, they all share ongoing – and growing – challenges, including water security. This large-scale initiative, focused on the evolution of urban spaces in a time of climate uncertainty, is a collaboration between more than 20 organisations — including universities, consultants, civil society and municipalities.

CSAG, a research centre within the Environmental and Geographical Science (EGS) department, has overseen the four-year, multi-consortia project which is funded by the United Kingdom’s Department for International Development (DFID) and the Natural Environment Research Council (NERC). CSAG is also a member of UCT’s African Climate and Development Initiative (ACDI), an interdisciplinary research hub that spans all faculties at the university. Through FRACTAL, CSAG has effectively demonstrated the value and necessity of interdisciplinary research.

FRACTAL’s researchers, who are working to advance science in a way that truly informs decisions in an African context, are supporting cities’ efforts to understand what their different futures might look like in different climate scenarios.

“FRACTAL’s researchers, who are working to advance science in a way that truly informs decisions in an African context, are supporting cities’ efforts to understand what their different futures might look like in different climate scenarios.”

Although southern Africa is expected to become generally hotter and drier in future, no blanket climate prediction can be applied to all cities in the region, given their unique realities and local priorities.

“There is a lot of uncertainty in climate science,” said Alice McClure, coordinator of the Future FRACTAL project.

“This is why it is so important to consider the range of plausible climate futures and understand how these might intersect with development.”

FRACTAL has aimed to provide accessible, timely, applicable and defensible climate information that is needed by decision makers operating on city and regional scale, she added.

In Lusaka for example, McClure said, researchers are working with decision makers to understand how their water security priorities could intersect with climate change in the future.

“During the Learning Labs, city decision makers have the opportunity to unpack future climate risks and to prioritise actions based on contextual concerns.”

Climate information is now also being integrated into the Lusaka Water Security Action Plan that will guide that city’s responses in the years ahead.

In future, urban life in African cities will not be determined solely by climate change and people’s response to these, but also by development and governance aspects.

“In fact, much of the time cities’ biggest challenges are development related, and we’re not sure how climate will intersect with these in the future,” McClure stressed.

“Much of the time cities’ biggest challenges are development related, and we’re not sure how climate will intersect with these in the future.”

“For example, hydrological models that have been produced within FRACTAL show that climate might not be the most notable stressor on Lusaka’s formal water source (the Kafue River) in the future. But it’s not that simple; inhabitants receive water from many different sources, many of which are informal.

“We are also not sure how other climate stressors will intersect with the development of the city. So, the question is, how confidently should we be pushing climate-change messages into a space that’s extremely complicated?”

Often, attempts are made to insert research results into African society in a top-down fashion that does not translate into effective policymaking or handling of climate-change issues. But FRACTAL takes a completely different approach.

“This project is not about ‘experts’ merely transferring their [climate-change] knowledge on to cities. On the contrary, it is about creating a culture of deciding together what information is useful and usable in the decision context, and how to co-produce this by integrating multiple types of knowledge,” McClure explained.

“The challenges faced by dense African cities with sprawling informal infrastructure networks require us to rethink the relationship between researchers, policymakers and civil society.”

Climate scientists, she added, are starting to understand that taking into account the context of an African city is “probably the most important part of producing usable climate information”.

FRACTAL is significantly changing the way climate information is integrated into African city planning processes, by focusing on transdisciplinary, collaborative research and the coproduction of knowledge between scientists, decision makers and civil society.

“Too often, we think that [climate] action is not taken because there isn’t enough information available. We also need to consider why the information that has been produced isn’t being used, and then create information for the specific user or context,” McClure said.

“FRACTAL hopes to inspire in this regard.” 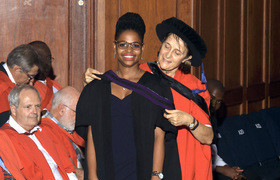