More than ever before, the past three years have brought to light the myriad ways in which black students still feel marginalised within South African tertiary institutions – especially those with a strong colonial past. Starting with #RhodesMustFall in 2015, students have been interrogating the space they inhabit within universities and asking important questions about changing the status quo into the future.

Final-year law student Kneo Mokgopa has used their LLB research paper on Law and Post-Apartheid Literature to do just that, utilising a passion for interdisciplinary research to interrogate the ways in which the space that the University of Cape Town (UCT) occupies has always been a painful and challenging one for black people to navigate.

As part of the research project, Mokgopa has conceptualised and constructed an arresting installation piece on middle campus “that connects the narratives of the [Rustenburg] slave burial grounds, the meaning of UCT building on top of it, the erased history of slaves in the colony and the current experiences of people of colour [here]”.

Titled ‘kufamba Pemakanda Emazai’, a Shona translation of the English idiom “walking on eggshells”, the name also reflects the xenophobia and general anti-African, anti-black currents on the university campus that the Zimbabwean student reports experiencing.

The temporary installation comprises a mannequin draped in black fabric with a cardboard bull’s head. It hovers above a hessian sheet strewn with broken eggshells and is tethered to the ground with a network of red ropes.

“The figure itself represents a black body. The bull’s head is there to represent labour and the ways in which black bodies – across time – in this space have been seen as agents of labour,” Mokgopa explained.

The eggshells scattered in front of the figure are there to represent the “excruciating discomfort” experienced in certain spaces by people of colour.

“That anxiety of not knowing if you are okay being in this space. If you’re allowed to be in this space and whether or not this space is tolerating you, accepting you, encouraging you to be here.”

Preventing the present becoming the future

Mokgopa’s work has also been significantly influenced by a relatively new field of study known as chronopolitics which, put simply, questions whether new futurisms (afrofuturisms, antifuturisms etc.) can be created that disrupt the unequal present from becoming the unequal future.

The tethering of the figure with red ropes is a physical representation of how the present of black bodies is still bound by their past existence, and how they run the risk of continuing in the same way into the future.

“All we have is what we have, and we’re doomed to continue existing in the kinds of times and time perspectives we exist in.”

“No new constructions of futures are present. All we have is what we have, and we’re doomed to continue existing in the kinds of times and time perspectives we exist in,” Mokgopa said.

Ultimately, the thesis calls into question the greater purpose of the university and whether it can become a space that enables the construction of new futures.

“What’s a university for? Is a university a training facility where students come and get certificates of skilled labour to sell on the job market? So, is it perpetuating those cycles of labour [represented by the bull’s head]?” they asked.

“We’ve decided to reclaim the university as a place of ideas, a place where ideas grow and are encouraged; where ideas sharpen one another, and are not silenced but are instead allowed to exist,” Phakeng told that meeting. 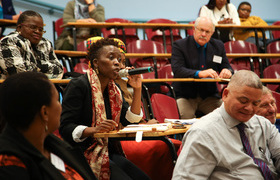 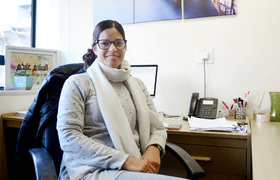