Why you shouldn’t pave over your garden

As attractive as paving and artificial lawn may be for Cape Town home owners whose gardens have succumbed to the drought, they are counterproductive when it comes to building a climate-resilient city, says Dr Kevin Winter of UCTʼs Future Water Institute and Water Task Team.

Recent winter rainfall over Cape Town has brought some relief after another long, dry summer. Stringent water restrictions remain in place in an effort to contain demand and allow storage dams to fill in the face of persistent uncertain weather.

“For many home owners, however, the rainfall has come too late in that prohibitions on using water to irrigate gardens have left lawns and plants wilting and dying. Many are thus tempted to abandon their lawns – as a recent message that slipped into the City of Cape Town’s news suggested,” says Winter.

“It stated that a ‘top way’ to help save water this winter is to let go of your natural grass lawn by installing artificial lawn or paving. This apparent advice might be appealing to weary gardeners, but it is counterproductive.”

Here are three reasons why.

Paved and artificial surfaces – known to landscaping professionals as “hardscaping” – reduce the possibility of water infiltrating the soil and recharging groundwater. Water falling on roofs and hardened surfaces builds up above ground and must consequently be removed from the urban space in order to avoid flooding.

“This is well known,” says Winter. “What is less obvious is the challenges of managing storm water once it enters canals and rivers via a network of storm-water channels and pipes. Once surface runoff reaches urban canals and rivers there is limited opportunity within the city of Cape Town to store this (frequently polluted) storm water and then use it to recharge groundwater and the aquifers.”

Peak flow rates to the canals often occur within minutes of a rain shower and, within a short space of time, large volumes of water are lost into the sea.

“Another result of ‘flashy’ discharges to canals and rivers through an often-blocked storm-water system is localised flooding in low-lying areas. Increasing areas of hardscapes (including artificial grass) on properties will simply exacerbate the chance of flash discharges and rapid losses of water to the sea,” explains Winter.

Given the extent of urban development, it is impossible now to reconstitute Cape Town’s riverine landscape to a pristine state. All that is possible is to direct storm water into constructed wetlands that can help recharge groundwater, rather than directly into canals.

Water-sensitive gardening can also help. When lawns are difficult to manage with limited alternative water sources, replacing them with climate-resilient, drought-tolerant, local indigenous vegetation can help to manage one’s garden and encourage infiltration into the ground with the additional benefit of reducing runoff and protecting against flash-flooding in the neighbourhood.

Good domestic garden practice means keeping rainwater on one’s property for as long as possible without creating risk to immediate or adjacent properties. Some ideas worth considering include:

“Now is not the time to pave over domestic gardens or allow the deterioration of parks. It is time to ‘grow green’ in water-sensitive ways.”

A well-known phenomenon associated with above-normal temperatures in city centres, as compared with adjacent suburban and rural areas, is the ‘urban heat-island effect’. Like a hot stone in the sun, concrete, brickwork and tarmac roads absorb and store heat. This raises the ambient temperatures in built-up urban areas.

Various studies have shown how urban gardens and parks help to reduce surface temperature extremes – not only do plants simply not get as hot as concrete, paving and tarmac, they also limit how much the surface heats up by shading it.

One United Kingdom study shows how trees and shrubs in parkland areas kept mean maximum daily soil surface temperatures in the summer lower by 5.7°C than in areas without woody plants, grasses and lawns.

“Cape Town needs to become increasingly prepared to deal with urban heat-island effects and warmer temperatures that could have an impact on health and ecological systems, and increase energy demand for cooling indoor conditions,” says Winter.

“The lesson: Now is not the time to pave over domestic gardens or allow the deterioration of parks. It is time to ‘grow green’ in water-sensitive ways.”

He continues: “We may not always welcome every creature into our gardens, but most will stay far away from a garden that offers no food or suitable breeding sites. A diversity of landscaping cover (for example groundcovers, shrubs, rockeries, trees and structures providing hideaways) creates niche habitat opportunities for native species with varying needs. Artificial, hardened surfaces don’t.”

Four desirable reasons for creating a biodiverse, water-sensitive garden include:

Ensuring a climate-resilient city starts with your garden

The challenge of water restrictions and mixed messages about what is or isn’t the right thing to be doing in a water crisis make it easy to lose focus on the long-term project of ensuring urban biodiversity, says Winter.

“We all have the means to contribute towards building a climate-resilient city. For those with a domestic garden, you can start by using the kinds of nature-based solutions outlined above to slow the flows of rainwater from your house, roof and paved areas; to use that water to recharge the groundwater through infiltration zones; to reduce the effect of ‘the urban heat island’ and help to keep urban spaces cool; and finally to attract native species to stay in the city.”

Lancaster, B. (2017) Planting the rain to grow abundance. TEDx talk. 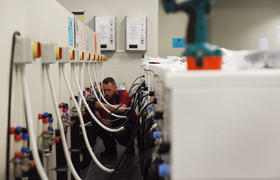 News
Will there be more rain this winter? 16 Mar 2018 Republished
TOP