The awards form a living memorial to the late Stella Clark, who was a language development lecturer in the Centre for Higher Education Development (CHED). They seek to shine a light on the exceptional teachers who are making a difference in the lives of disadvantaged students under extraordinarily difficult circumstances.

Since 2005 UCT students have been called on to write motivations for such teachers. The university receives many strong nominations, noted Vice-Chancellor Dr Max Price in his introduction to the ceremony on 8 May. To be selected out of teachers of this calibre is an honour indeed.

“It’s truly inspiring, and humbling, to have you here.”

“He forced hope into our hopeless hearts.”

Biyase, who is completing her Postgraduate Diploma in Accounting, likened the task of selecting just one of her teachers for the nomination to entering a garden full of blossoming flowers when able to pick just one.

In a glowing tribute to Kubeka, she recalled the high expectations, constant encouragement and affirmations he passed on to his students.

He was more than a maths teacher, she recounted: he was a life coach.

“The first time I had to touch a computer, it was here at UCT. [At Menzi High School] I had to share books with five other students.”

The school is old, she said. Many windows are broken. Biyase spent her high-school years sharing a desk with three other learners.

Not only did Kubeka provide extra lessons before and after the school day, he spent his weekends teaching as well. These extra sessions were open to all learners in the surrounding township of Umlazi, in KwaZulu-Natal.

He believed that this had a double benefit: helping the students to improve in their studies, as well as keeping them away from crime and drug abuse.

“When this opportunity [to nominate Kubeka] presented itself … I had to take it, because I know where I come from and I know how much my teachers have done so that I can be here,” said Biyase.

Kubeka would speak to the students about his own struggles, she said. He emphasised that it was through his persistence that he had come to be a teacher.

Kubeka matriculated from a school in a highly disadvantaged community. But his high-school teachers were incredibly supportive of his education, “despite the odds that were forever stacked against us: poor infrastructure, poverty, the list goes on”.

“Mathematics is a subject that South African students fail the most, nationally. My mathematics teacher sowed a seed for the love of mathematics … I believe that the learners that I teach deserve the same support.”

“He was more than a maths teacher … he was a life coach.”

Kubeka began his journey as a teacher at Menzi High School in 2009. Now, as head of the mathematics department, his innovative teaching practices have led the school through its 10th year with a matric mathematics pass rate between 98 and 100%.

He describes this time as being characterised by focused, diligent and strong leadership within the school.

“Most learners I teach come from the informal settlement of Umlazi, the second biggest township in South Africa.

“Learners from these households generally face poverty, overcrowding – both of which does not allow peaceful and productive study,” he said.

Many learners do not have role models, or parents schooled in mathematics.

“These are the challenges we as teachers have to put up with every year, and successfully turn the tables on most.”

Kubeka outlined a number of the teaching practices he has instituted in his mathematics department.

He begins by admitting learners into mathematics classes without placing importance on their previous performance in the subject. This helps to dispel notions of mathematics as a difficult subject, he explains. It also helps to motivate those students who have performed poorly in the past.

Kubeka maintains a series of formal and informal assessments of students – to help determine their varying degrees of potential. These include mock examinations, to help learners get a sense of what the exam will be like ahead of time.

He makes use of peer tutoring. Top performing students are identified and paired with five poorer performing classmates. The groups work and study together.

“It was through their encouragement that I was able to come to UCT.”

Student tutors are provided with special guidance and coaching, to ensure that difficult concepts are clear. Kubeka remains close at hand to help if necessary.

The importance of establishing these groups, as active and purposeful support systems within the classroom, “cannot be underplayed”, he said.

Students are required to use their individual study sessions for quiet study and homework, which is not always possible in their home environments.

Kubeka also provides extra lessons – before and after school for matric learners, and over weekends to learners in grades 8 and 9 – to ensure that the correct basics sink in.

“The learners sometimes face the unfortunate situation where, in primary school, they have to be taught by teachers who are not trained in mathematics,” he said.

Finally, Kubeka rotates mathematics teachers, to ensure they are as equipped to take grades 8, 10 and 12 as they are for grades 9 and 11.

“This works wonders for us at Menzi High School.” 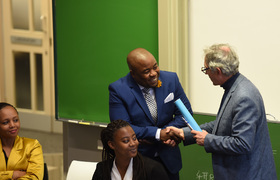 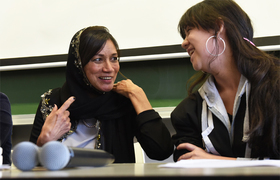 News
Yes you can, is inspiring history teacher's challenge 17 Aug 2016 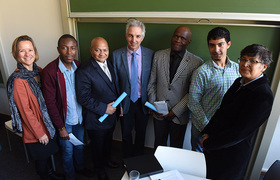 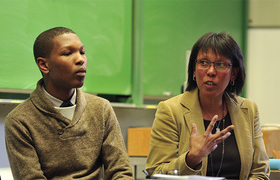