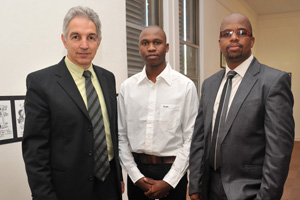 If, in the wake of the foundation phase tests, recent media reports dwelled on what's gone wrong with school education in South Africa, then the Stella Clark Teachers' Award fêtes what goes right.

No more so than in the case of 2011 recipient, Siphiwe Thwala, a maths teacher at Kwezi High School in KwaZulu-Natal. At the award presentation hosted by UCT's Centre for Higher Education Development on 16 August, Thwala was hailed for his dedication and innovation as a maths teacher.

Among those doing the hailing were UCT students taught by Thwala at Kwezi and Siyamukela High School, also in KZN. They spoke of how, under Thwala's instruction, their marks went from middling to well above average.

Mndeni Msibi, the student who had nominated Thwala for the award, recounted how the teacher's use of peer education - pairing up learners - helped him up his marks.

Thwala, in turn, spoke of the importance of language in teaching. He would, when the occasion calls, throw in tsotsi taal.

"Sometimes you find that learners fail maths not because they don't understand the subject, but because of the language barrier," Thwala said. "As teachers we need to use different languages to make it easier for them."