Her lecture was titled “In search of ‘The first South African composer’: The potholes and pitfalls of researching the history of Western music in South Africa”. Her exploration of this history focuses on French national Charles Etienne Boniface, “a man whose life encompasses so many peripeteia”, as Sandmeier’s introducer, Acting Dean of Humanities Professor David Wardle, noted.

Research on ‘firsts’ in South Africa is bound to be challenging. As a historical musicologist, Sandmeier is no stranger to these difficulties. She studied music and modern English literature at Trinity College, Dublin, where she completed her PhD in musicology in 1997.

She worked in musicology at the universities of Münster and Potsdam in Germany before joining the South African College of Music (SACM) in 2011; she was appointed its director in 2014. Her present research centres on oratorios in 19th-century Germany and on the collection history of the Grey Collection at the National Library of South Africa.

First is the ambiguity attached to the term ‘composer’.

“What comes to mind is probably someone who writes music, probably Western music, on a piece of paper. This is a very limited idea of composing – even in Western music. Western music started as an oral tradition and was written down only later: composition. Not everything played or performed is written down. The idea of the composer as someone writing music is quite limited and even more limited if you look beyond Western music into traditions like jazz or traditional music.”

Given the current challenges around colonial legacy and contested histories at UCT, Sandmeier says she wasn’t surprised to receive a call from Vice-Chancellor Dr Max Price about a fortnight before the event. The title of her lecture had been a red flag.

“He was worried it might be contentious. I was chuffed. I wanted people to think about the markers in the title. But he asked all the right questions. So, what are we looking for … I thought that maybe looking at someone who has been called the first South African composer might provide some clarity.”

Boniface was that man.

It was at the National Library reading rooms that Sandmeier was first introduced to a book – a collection of songs written for lyre guitar – that Boniface had copied for a Ms HS Joubert in Cape Town in 1821. To perform one of these unrecorded melodies, “Le Vent”, were Sandmeier’s SACM colleagues soprano Louise Howlett and James Grace on guitar.

But who was Boniface and what was he doing in the Cape? Sandmeier’s secondary literature search revealed that he was born in France in 1787 but came to the Cape via the Seychelles, where his father had died after being banished. He was also a teacher of languages and music and was one of the first to have a lending library of music in the colony. However, he was known more for his literary production.

Nonetheless, Boniface’s work is first mentioned in Cape history in 1928. And in 1946 Amsterdam-trained musicologist Jan Bouws picked up the theme in which Boniface is presented as a dominant figure in music and theatre in South Africa, “among pioneers of theatre, music and dancing”.

Bouws had studied piano in Amsterdam and taught piano in schools. He came to South Africa in 1946. Before that he’d published on Afrikaans as folk music in South Africa. He completed his PhD in 1965 and retired from Stellenbosch University in 1972.

“The references between 1928 and 1990 all say the same things,” says Sandmeier. “They are copied all the way through.”

After 1990 there isn’t much written about Boniface’s music. Instead the record focuses, puzzlingly, on his literary standing and his role in the formation of written Afrikaans (he was French after all).

Sandmeier noted “a strange discrepancy” between her primary source, the music book, and the secondary literature. She set about looking for more material and concordances in the records.

She found only five songs that might be attributed to Boniface as his original compositions.

The context of the secondary literature holds the key to the conundrum: the rise of Afrikaans and the intense search for Afrikaner history and culture in which Bouws was bound up. Milestones around it include the music for Die Stem written in 1921; Afrikaans replacing Dutch as the official language in 1925; Die Stem being sung alongside God Save the King in 1928 and the Bible being translated into Afrikaans in 1933.

“It seems to have been politically opportune to have a local composer or music master active at the same time as the formation of written Afrikaans … And, of course, the story of Boniface as a composer was propagated by one person ...”

In 1960, even before he arrived in South Africa, Afrikaans academic circles had created an institute for Bouws.

“I suspect”, says Sandmeier, “that he had massive connections in the Afrikaans cultural elite … Was the story about Boniface politically motivated or even ideologically because Bouws was in search of Afrikaans history in folk music and Western music?”

When it comes to other contenders for the title of “first South African composer”, Sandmeier says it’s clear that Boniface is not a good choice.

“Looking at South Africa not as a state but as a region there are two contenders at the beginning of the 19th century whose music has been passed down in notation. Ntsikana Gaba (c 1800) was an early Christian convert and composed hymns, words and music for his own services. Those were handed down by oral tradition in the late 19th century by John Knox Bokwe. Another contender might be the musician featured in ‘A Gora Player’, a picture taken from William Burchell’s Travels in the Interior of Southern Africa.

“Someone took the trouble to listen and write down what he played.”

But what about South African composers whose music was never written down? Looking at other written sources, the so-called diary of early Portuguese explorer Vasco da Gama notes a scene in which indigenous people came to the shores bringing cattle and sheep. Among them were five people playing flutes. Da Gama wrote: “We went ashore at once.”

In addition, there is iconographic evidence seen in the form of bow players depicted in a cave painting near Maclear in the Drakensberg.

But, as Sandmeier concluded, this was as far back as she was prepared to go in her search for South Africa’s first composer. 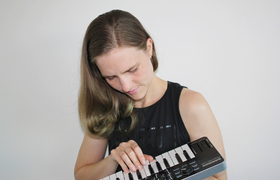 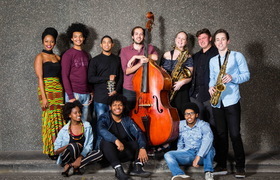