TB under the spotlight

In the run-up to World TB Day on 24 March 2018, learners from Alfred Stamper Primary School in Worcester participated in the launch of a science engagement programme which aims to teach how tuberculosis (TB) is diagnosed, the signs and symptoms of TB, TB treatment and the inner workings of a TB laboratory.

The “TB Under the Spotlight Science Engagement” programme was conceptualised and presented by scientists from the Division of Molecular Biology and Human Genetics at Stellenbosch University in partnership with the UCT-based South African Tuberculosis Vaccine Initiative (SATVI) and the Department of Education.

Other partners in the initiative include the South African Medical Research Council (SAMRC) and the Department of Science and Technology / National Research Foundation Centre of Excellence for Biomedical Tuberculosis Research.

The programme will be taken on a roadshow through the Cape Winelands District between 20 March and 25 April 2018, reaching 20 primary and secondary schools over this period.

Microbiologist and TB researcher Dr Michael Whitfield from Stellenbosch University said that the initiative was put together with the main aim of enthusing young learners, highlighting TB awareness and the science behind TB research, and destigmatising the disease.

The four exhibits used in the programme (signs and symptoms, diagnostics, treatment and outcomes, and science and research) use simple creative messages and are pitched at learners of different ages. One of the exhibits even gives the impression that you are in a laboratory.

Whitfield expressed the hope that this initiative would be the basis for continued collaboration between the various institutions involved.

Prevalence of TB in the Cape

Dr Lizette Phillips, director of health for the Cape Winelands District, told the participants: “Despite the TB caseload showing signs of dropping over the past few years in the Cape Winelands, the burden of disease is still high.”

In 2011 the caseload was 7 500 dropping to 6 997 in 2015. The main focus of the Western Cape’s Department of Health in dealing with TB was finding new patients, getting them on treatment and integrating the management of their treatment.

This education initiative comes at a time when the numbers show a downward curve in the incidence of TB, said Associate Professor Tom Scriba of SATVI, but the tide has not yet been stemmed.

He gave an overview of the World Health Organization’s End TB Strategy, which emphasises the need for intensified research, bringing together the brightest minds in confronting the problem. The strategy also highlights the need for better vaccines, better diagnostic tests and better treatment and drug regimes.

Professor Glenda Gray, president of the SAMRC, explained that anyone can get TB, relating how a senior colleague of hers was diagnosed with TB and had to take six months off work.

“It was only through science we could develop a new vaccine with which to curb TB.”

Read the full “TB Under the Spotlight Science Engagement” programme… 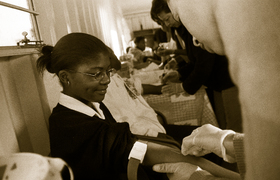 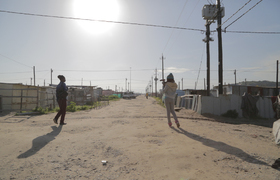 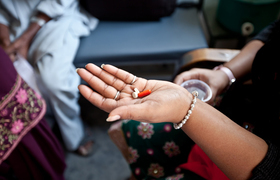