Professor Mark New, director of UCT’s African Climate and Development Initiative (ACDI), and holder of the AXA Research Fund Chair in African Climate Risk, has been recognised for his global contributions in leading climate research.

This accolade was presented in the form of the Piers Sellers Prize for a world-leading contribution to solution-focused climate research. It is one of two awards made annually by the Priestley International Centre for Climate at the University of Leeds in the name of the former NASA astronaut and climate scientist.

The award was presented to New at a ceremony on 19 March, where he delivered the keynote address, titled “Anatomy of a water crisis: climate, demographics, communication, behaviour and politics in Cape Town”.

The talk analysed the factors that have combined to set South Africa’s legislative capital on a countdown to Day Zero - when the city’s taps run dry following a multi-year drought.

A global leader in climate research

New, the pro vice-chancellor for climate change at UCT, is a global leader in the interdisciplinary integration of climate and development research.

He is at the forefront of cutting-edge research on the twin issues of low carbon and climate resilient development from a strongly African perspective. The ACDI that New directs reflects the largest concentration of expertise in climate and development in Africa.

It was for this interdisciplinary and solutions-oriented research that New was nominated by Professor Lea Berrang Ford, holder of the Priestley Chair in Climate and Health at the University of Leeds. Berrang Ford cited New’s projects GreenSkills and SmartAgri as examples of this work.

GreenSkills works to facilitate a more proactive approach to green planning in South Africa using a systems-based perspective to build capacity. The project saw to the development of training materials and programmes, including a toolkit for organisational development and the greening of jobs along the value chain of an organisation or sector.

“He takes an interdisciplinary approach … and the title of his talk on the Cape Town water crisis reflects the complex and intertwining nature of the issues involved in his area of climate research.”

The other project, SmartAgri, provides a roadmap for actionable initiatives to get the agricultural sector moving towards greater climate resilience, as well as the production of the Climate Change Response Implementation Plan for the Western Cape.

“Mark initially trained in the physical sciences, and his early contributions and expertise focused on climate modelling,” said Berrang Ford.

“His more recent publications reflect a transition to stronger interdisciplinary and policy-focused research, with research emphasis shifting to include adaptation, mitigation and development implications of climate scenarios and uncertainty.

“I am delighted Mark has been selected for the prize out of a very strong field of contenders for the lifelong contribution award,” she said.

“He takes an interdisciplinary approach, working with other stakeholders, and the title of his talk on the Cape Town water crisis reflects the complex and intertwining nature of the issues involved in his area of climate research.” 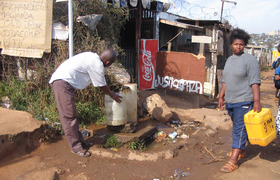 Research and innovation
The politics of water 20 Mar 2018

News
Will there be more rain this winter? 16 Mar 2018 Republished