20 July 2017 | Story Pete van der Woude. Photo Michael Hammond.
UCT’s Professor Rashida Manjoo, one of the world’s leading experts in identifying the causes of and eradicating violence against women, received an honorary doctorate from the University of Glasgow on 23 June.

Born and educated in South Africa, Manjoo throughout her life has followed a path marked by her dedication to improving the lives of the less fortunate by promoting social justice and challenging all forms of oppression and discrimination.

She was appointed as the Special Rapporteur on Violence Against Women by the United Nations Commission on Human Rights in 2009, a position that she held until 2015.

Manjoo’s work as an “activist academic” dates back to the 1980s in apartheid South Africa.

Her activism, which was initially part of the broader struggle against apartheid, deepened as she began her work on the human rights of women.

In her view, violence against women is not limited to conflict zones. Instead, it is part of a continuum of the low-level warfare that women face on a daily basis in their families and communities.

In 2001 she was appointed as the parliamentary commissioner to the Commission for Gender Equality in South Africa, a position that she held for five years. Her task was to ensure that all draft legislation passing through parliament was gender responsive and in line with constitutional imperatives.

Her experience and research led her to adopt in her later UN reports an intersectional approach to discrimination and violence against women, emphasising the links between the violence and socio-economic conditions, race and historical and cultural contexts. 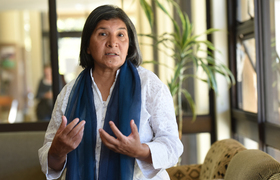