No doubt, this demeanour has stood her in good stead in a career that has spanned human rights activism under apartheid to a more recent six-year stint as a special rapporteur on violence against women for the United Nations.

As the UN's representative, she visited 19 countries, speaking to women in camps, prisons, refugee detention centres and elsewhere to gather information on the causes and consequences of violence against women.

The stamps in her passport include troubled countries like Honduras, Somalia and Afghanistan but also more 'developed' states like the United Kingdom and the United States. But more of this later.

Manjoo's work as an “activist academic” dates back to the 1980s in apartheid South Africa and includes her work with the Street Law Programme and in the law clinic at the then University of Natal.

“My social justice and human rights work is framed by my own context and reality,” she explains. “My parents couldn't afford education, so after matric my first job was as an accounts clerk in a clothing factory.” Juggling work and children, she obtained three degrees and immersed herself in activist work.

The law clinic work in the 1990s involved reaching out to communities to provide free legal services and also conduct educative activities. For example, using donated shipping containers which were set up at a taxi rank, students working with the law clinic would dispense legal advice closer to people's homes. In the afternoons they conducted educational workshops in community halls. This bringing together of “town and gown” is something that lies close to Manjoo's heart.

Her activism was initially part of the broader struggles against apartheid oppression and injustice, but as it became clear that a new era was dawning, she deepened her work on the human rights of women and was deeply involved in processes that embedded this in post-apartheid South Africa.

“Towards the end of the 1980s, it became an imperative to start focusing on women's human rights,” she recalls. “We had learned from many other liberation struggles that the gender struggle would not necessarily be high on the agenda and thus this needed to be made explicit.”

To this end, she was actively involved in processes around developing a women's charter, consulting with women on the ground and feeding information into the constitution-making process. She was also involved in different capacities in law reform work during this period.

In 1998 she joined UCT's Law, Race and Gender Research Unit (no longer in existence) where she was involved in developing materials and also providing social context training for judges and magistrates.

She was appointed as the parliamentary commissioner to the Commission for Gender Equality in 2001. Her task was to ensure that all draft legislation passing through the South African parliament was gender responsive and in line with constitutional imperatives.

When she left for the US in 2005 to work in the Human Rights Program at Harvard Law School, she had no idea that she would end up staying for two and a half years. On her return to UCT, she worked on a research project on women's rights and traditional justice mechanisms with Professor Chuma Himonga.

In 2008 she was appointed as the Des Lee Distinguished Visiting Professor at Webster University in Missouri where she taught courses on transitional justice and women's human rights.

All of this experience was excellent preparatory ground for her appointment by the UN Human Rights Council that kicked off in 2009 and ended only last year.

Manjoo's UN role included providing thematic reports to the Human Rights Council in Geneva and to the General Assembly in New York. To this end, she wrote 11 reports (over and above the 19 country reports) that pushed the conceptual understanding of member states on violence against women, its causes and consequences. A particular focus was identifying the “normative gaps” in international law between human rights standards and violence against women occurring on the ground.

Her last two reports identified that under international law there are no provisions that impose legally binding obligations on member states to eliminate violence against women. She believes that a specific international treaty is required to address the normative gap, but the UN does not appear to have much appetite for this.

In her view, violence against women is not something limited to conflict zones. Instead, it is part of a continuum of the low-level warfare that women face on a daily basis in their families and communities, and is exacerbated in times of conflict.

Serving in an individual capacity, her country missions as special rapporteur could only be carried out on invitation from a government.

She counts Algeria among her successes. After visiting the country, she met with the Algerian ambassador and her recommendations translated into the government passing a law on domestic violence, which was a unique achievement in the North African / Middle East region.

Her report on a more recent visit to Sudan is due to be released in May. She anticipates “fireworks” from a government that is reluctant to accept responsibility for human rights violations that are widespread, whether perpetrated by state or non-state actors. “The narrative in the capital, Khartoum, is that there is no violence against women except in the refugee camps in Darfur.”

While in Sudan, she was constantly watched by security officials or “well-meaning” government officials who sat in on every interview. After privately speaking to four students from Darfur in her hotel (they had requested a separate meeting), two were picked up by security police when they left. The other two managed to run back to the hotel and, for three hours, Manjoo physically shielded them against arrest. She did so on the grounds that their arrest would constitute reprisals against informants who were sharing information on human rights violations, which would violate the terms of reference governing a country mission. Government representatives from the diplomatic corps managed to resolve the issue, largely to avoid creating a diplomatic incident.

In Somalia she visited refugee camps outside Mogadishu. Wearing a bulletproof vest and helmet while travelling in a Casspir, she noted at the same time that “normal life” was continuing, even in the camps. Here she found that crisis management tended to cloud the very real issue of the daily violence that women experienced and the blame that was constantly cast elsewhere.

In Zambia she noted a high population of women with their children living in appalling prison conditions – many arrested for what she calls “crimes of poverty”.

Manjoo says when an invitation was not forthcoming from a country, she was never shy to request one. Zimbabwe and South Sudan are African countries that have failed to respond to requests for visits, while Israel prevented her scheduled mission to the Occupied Palestinian Territories by not granting her a visa.

She is not sure exactly what caught the eye of the University of Glasgow, which is to award her an honorary doctorate in November this year. Her investigation of the UK during her 16-day, fact-finding mission as the UN rapporteur included a public lecture at the university.

While in the UK, she delivered some home truths about the over-sexualisation of children and the damage caused to the service provision sector due to the devolution of functions and budgets to local authorities and the introduction of new commissioning policies. She also made headlines when she was refused entry into the Yarl's Wood Immigration Removal Centre where female detainees had complained about their treatment at the hands of male guards.

This serves as proof that governments all over the world remain defensive about human rights issues. 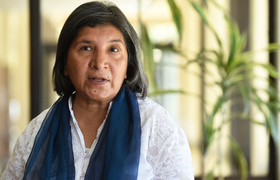