For the first time, UCT's popular Summer School has a lecture series featuring some of the university's brightest young stars – scientists who are making a name for themselves in their field of study. In the line-up was Dr Tana Joseph, a postdoctoral fellow in the Department of Astronomy at UCT.

Centaurus A is the fifth brightest galaxy in the sky, about 12 million light years from Earth. It's famous for the dust lane across its middle and a giant jet blasting away from the supermassive black hole at its centre.

But, as Dr Tana Joseph explained during her Summer School talk titled Many Eyes on the Sky, we would not be able to see this were it not for Chandra, a satellite that observes astrophysical objects from space using X-rays.

Were we to look at the same galaxy through an optical telescope like SALT (near Sutherland) most of this detail would be missing.

This is why astronomers employ a variety of instruments able to measure frequencies of electromagnetic radiation, from low-frequency radio waves through to what is visible to the human eye to short-wave gamma-rays.

This is also the main driver behind projects like the Square Kilometre Array (SKA) which will eventually make use of radio dishes stretched across a vast geographical area from South Africa to Australia.

Stars in her eyes 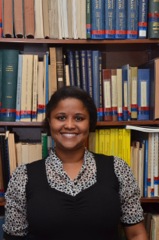 Joseph's talk was part of the Young Scientists Series, a new feature at Summer School.

“I like doing public outreach talks because astronomy is so accessible to everyone. Most human beings have looked up at the sky at some point and wondered what they are seeing,” she told the audience.

Her interest in astronomy was sparked at the age of 11 when she first saw images taken by the Hubble Space Telescope. There and then, Joseph determined she wanted to be an astronomer when she grew up, an ambition that not everyone took seriously.

“People thought I was weird but they indulged me because they thought I was a cute child,” she said. Nevertheless, they also told her she would have to work in America because South Africa didn't need astronomers.

Then SALT came along, followed by KAT7, MeerKAT and the SKA project, making southern Africa an international astronomy hub.

Joseph now has a PhD from the University of Southhampton and is currently a postdoctoral fellow at UCT, funded by the SKA to do multi-wavelength studies of high-energy binary (star) systems.

Other young scientists to feature in the lecture series are Lindiwe Lamola, a human genetics doctoral candidate who is looking at inherited cancers, and Jessica Dawson who is studying towards a PhD in zoology focusing on hippo dung.

Their talks are part of a much more comprehensive Summer School programme that ends on 29 January. The Centre for Extramural Studies also offers regular public lectures through the year.