The masonry structures on upper campus keep their rock treasures well hidden. Geologist Associate Professor John Compton took Monday Monthly on a tour to uncover these geological gems – and discovered an exquisite continuity between the rocks found in nature (both above and below ground) and those on campus. 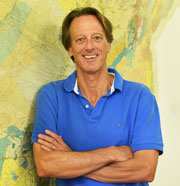 John Compton is trained as a low–temperature geochemist, and his general area of interest is the geochemistry of marine sediments. More recently, he's become interested in the role of Pleistocene climate change and sea–level fluctuations in the evolution of humans in Southern Africa. He also convenes the first–year course, Introduction to Earth and Environmental Sciences.

Sandstone adorns various door and window frames on campus. It is also the rock making up the cliffs above upper campus.

The colourful stones that make up some of the embankments are also examples of sandstone. These stones owe their different colours to mineral deposits such as iron oxide (responsible for the reddishbrown, rusty hues) and manganese oxide (the purple-to-black stains). Sandstone is sedimentary rock that forms where sand (from the beach or in riverbeds) accumulates and becomes cemented through burial. It is so resistant to weathering because it is made almost entirely of the mineral quartz, says Compton.

Sandstone is most visible (Table Mountain's cliffs are all sandstone) because it makes up the uppermost layer of rock. The sand from which the stone is made was deposited on exposed Malmesbury rock and granite between 510 and 500 million years ago, after these deeply buried rock groups rose to the surface, the result of a series of continental collisions.

Jammie steps, as well as other features on Jammie Plaza (including the fountain), are made of Cape granite.

Some 540 million years ago Cape granite magma pushed up through the Malmesbury rock from deep below the African continent. This magma began to cool and crystallise, approximately 10 kilometres below Earth's surface, into the granite rocks we see today. Lion's Head rests on a foundation of granite, and large granite boulders (such as those at Camps Bay and Boulders Beach) dot the shoreline of the Cape Peninsula.

Granite boulders are distinct from the jagged exposures of sandstone and Malmesbury rock, firstly because granite is an igneous rock. "This means it is crystallised from a liquid magma rather than deposited as sediment particles that form layers upon a sea floor. Granite therefore forms large, relatively homogeneous masses (blobs) – in contrast to sediment, which forms stacks of successive, flat-lying layers," reveals Compton.

According to Compton, the granite used on upper campus (as well as at Rhodes Memorial) most probably came from the Higgovale quarry at the foot of Table Mountain.

The rock upon which the university is built is the oldest in the Cape Town area. It derives its name – as is often the case – from the area where it was first or most completely described, says Compton (the town of Malmesbury). Furthermore, the Malmesbury rock group started out as marine mud and muddy sand, and underlies much of the coastal plain, Signal Hill, Mowbray Ridge and the hills of the Tygerberg. The rocks visible from the Sea Point Promenade are examples of Malmesbury rock.

"How far down the Malmesbury rock goes, nobody knows," explains Compton. "We know it's the oldest in Cape Town because it occurs at the lowest levels, and all other rocks either rest on top (sandstone) or cross–cut it (granite)."

How long ago the sediment that would eventually become Malmesbury rock was deposited is not an easy question to answer, because the rock lacks fossils; however, it is estimated that the Malmesbury sediment was deposited around 560 million years ago. The absence of fossils indicates that the sediment accumulated before there was abundant animal life on Earth.

The dark Malmesbury slabs at the base of the Rhodes statue on upper campus were probably quarried at the Waterfront basin, according to Compton. He explains that Malmesbury rock is more easily worn away than granite or sandstone, and is therefore less visible than its hardier counterparts. An explanation for the greater resistance of the rocks under Signal Hill and the Tygerberg Hills is that these formations were baked from below by hot magma, which "now lurks out of sight beneath the surface as long-since-cooled granite".

Only two of the many types of decorative stones on upper campus are not from the Cape Town area. They are the pink granite at the entrance of the RW James Building, and the travertine slabs at the New Science Lecture Theatre located on the opposite side of the road. Travertine is a type of limestone formed by layered deposits of calcite. It is commonly used as a decorative stone on buildings. The pink granite owes its colour to potassium feldspar.

The sources of both the pink granite and the travertine are unknown to Compton, but it is possible they were imported from as far away as Europe to 'dress up' the building entrances. 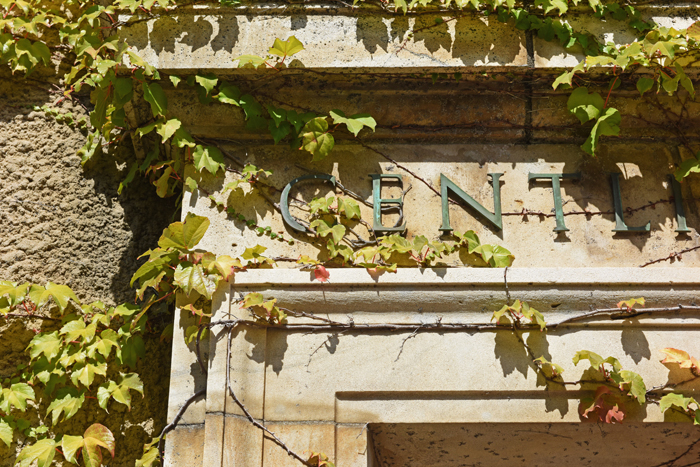 Sandstone
The door frame of the main entrance to the Centlivres Building is made of sandstone. 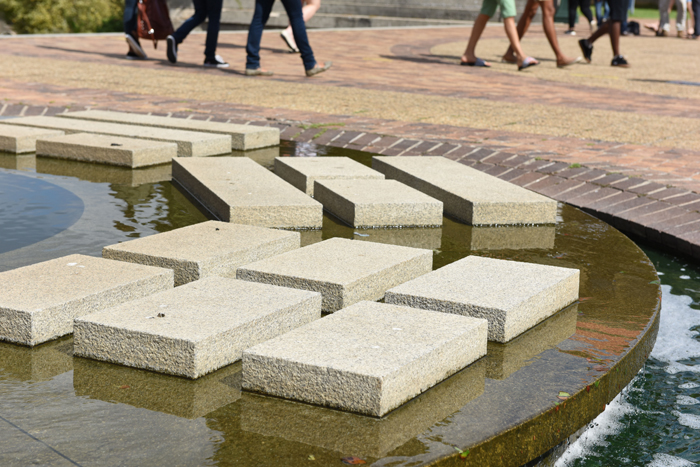 Granite
Jammie steps, as well as stones in the fountain on Jammie Plaza, are classic examples of Cape granite. 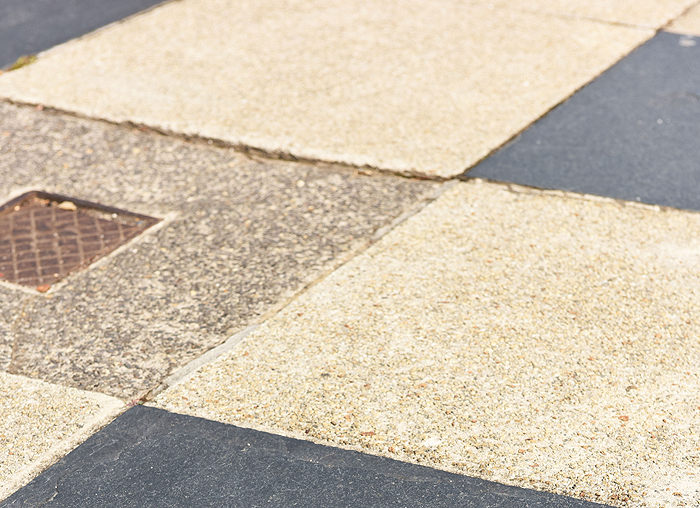 Malmesbury
The black stones between the granite paving below the statue of Cecil John Rhodes at the bottom of Jammie steps are Malmesbury rock, which is the same stone on which upper campus is built. 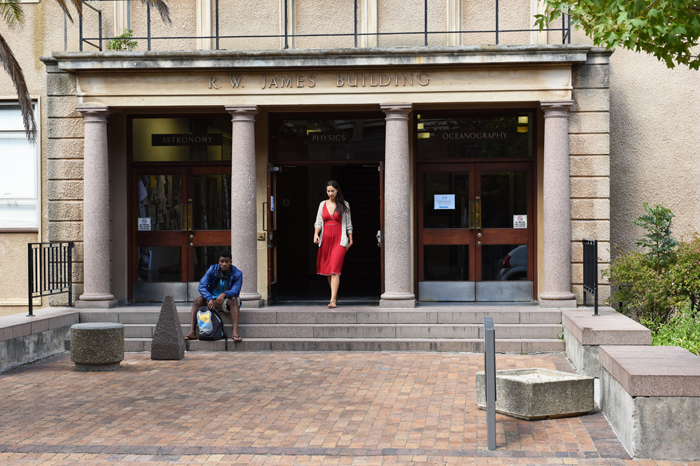 Pink granite
It is uncertain where the pink granite adorning the entrance to the RW James Building comes from, but it is believed to have been imported from Italy.