Do courses in economics and sociology adequately prepare students to deal with issues of poverty and inequality in society? Professors Nicoli Nattrass, Ari Sitas and Associate Professor Edwin Muchapondwa debate the point.

Economic theories that justify the status quo dominate curricula - to the detriment of students' ability to navigate the real world, says Professor Nicoli Nattrass, a professor in UCT's School of Economics and a researcher at the Centre for Social Science Research (CSSR).

Speaking at a seminar devoted to interrogating whether the university's economics and sociology curricula are adequately preparing students to deal with issues of poverty and inequality in society, Nattrass was joined on the panel by Professor Ari Sitas, head of the Department of Sociology at UCT, and Associate Professor Edwin Muchapondwa, head of the School of Economics.

A space for radical political economy

Neo-classical economic theories - which gained near-hegemony during Margaret Thatcher's reign as British Prime Minister in the 1980s - are simply assumed to be the only logical way to think about the world, argues Nattrass; and as such, students are not properly exposed to alternative ways of thinking.

"For me, the persistent blind spot is political economy... What [economists] don't take seriously is the kind of radical political economy, the old Marxist tradition, which tends to be dismissed as, 'Oh, that's just wrong'. But the trouble is, it resonates really strongly in other disciplines and in society.

"And the thing about radical political economy - and you don't have to believe in Marxist labour theories of value; in fact, there're a lot of Marxist economists who use fairly mainstream economic tools - is that it takes a broader look at power. It looks at power more like Marx used to talk about it.

"There's an economic base and a superstructure, and this superstructure is serving particular interests at a class level, whereas economists tend to push that away as an embarrassing afterthought, and look at the individual.

Everything boils down to how individuals behave, and the way they ascend to [the superstructure].

"The trouble is, if you ignore that whole tradition of political economy, it gives economics - including economics at UCT - a very one-sided feel, especially when viewed from other disciplines. It diverts attention from the political and other superstructures that interact with economic power, and shape distribution."

Another "blind spot" is the near-absence of economic history in the course work, says Nattrass: "There's no compulsory economic history of capitalism in the School of Economics, or of how political and economic struggles affected the way that incomes are distributed, and the kinds of social insurance that have been implemented in the world over time."

This gap means students are not taught that there are multiple paths to economic growth, when this is certainly the case, says Nattrass.

Inequality in all disciplines

By its very nature, suggests Sitas, sociology tackles inequality: "It's about an unequal, interconnected, patterned and evolving sociality. It's to be expected that sociology would teach something about inequality – Well, it does. If you take away sociology and social development and some other centres in other faculties, [the teaching of inequality] will disappear."

Sociologists at the university are pondering the high failure rate of their courses, and Sitas offered one explanation.

"Let me put it bluntly. Most students are not interested in poverty. 'Give us identity, give us multiple identities, give us sexuality, give us whatever, but this poverty nonsense?' Either they're escaping from it, or they're not concerned.

"In the subjects that teach inequality, you have disinterest. They're doing it; they're making time, and [students] fail not because they're stupid - many of them are clever - but [because] they think very little of it." This is not to say that all students are uninterested in researching poverty and inequality, says Sitas; but in the main, this is what he has observed.

It doesn't help that there is a "total urban bias" in the course content - not just in sociology, but across most of the university, says Sitas.

There are also pedagogical issues that need addressing: "Inequality is taught too economistically sometimes. It's [reduced to] doing bad economics in sociology, really, whereas there are other inequalities, vital inequalities.

"Finally, as sociologists, we can do only this much," says Sitas, holding his hands slightly apart. "It would be fantastic if these themes were being taught differently, and through different lenses in other spaces - and not only that they were taught, but that we knew they were being taught; in other words, that we could communicate with each other."

Meanwhile, Muchapondwa agreed that while the economics curriculum did address issues of poverty and inequality to an extent, it could do so more explicitly.

"Poverty is central when thinking about economic growth. The way we think about it is that you have a cake, and this cake must be divided. Some people can get larger pieces, some people can get smaller pieces."

The 'traditional' way of solving the problem was to make the cake bigger, says Muchapondwa. Much of this way of thinking came from theories that posited the separation of 'efficiency' and 'redistribution', with a focus on efficiency until the cake was big enough for it to be distributed equitably.

He agrees with Nattrass that neo-classical economics dominates the scholarly landscape at present, and that there's a need for an economic history component.

"Of course, we recognise that there are different models which explain how nations grow," he points out, adding that this is why "high-level" courses expose students to both neo-classical and alternative models.

Furthermore, the undergraduate curriculum does expose students to issues of poverty and inequality, says Muchapondwa, but the next step is ensuring that these bits and pieces dovetail and add up to a coherent foundation of knowledge that students can put to use.

Joshua Budlender, an economics honours student present at the debate, agreed there was not enough debate about economic theories at an undergraduate level: "There's no real attempt to engage with South African issues [in class]. For example, why is it the case that throughout my undergrad there were always snide comments coming from lecturers and students, about COSATU, say - 'Oh, these are the unions; they're the troublemakers; they've got no interest in developing South Africa; it's all about their own interests'.

"That's something that permeates your entire undergraduate career."

Another example was the unquestioned assumption that the youth wage subsidy is 'obviously' a good thing: "Maybe it is and maybe it isn't. But the point is there is a legitimate debate that goes on about real issues, and it isn't entertained.

"We always say that the pie's getting bigger, but we never ask if somebody is actually getting a bigger slice of the pie, or if it's just the same people that are going to get the bigger slices," observed Budlender.

Emeritus Professor Francis Wilson used his position as chair to suggest that teachers needed to give students a "gut sense" of what poverty was about. He observed that students tend to confuse analytical thinking with being skilful in technique, which is detrimental to how they approach problems that require innovative solutions: "This society has operated for 100 years in such a way that the very way we have generated wealth has generated poverty. [The] way in which we used the migrant labour system generated poverty in the rural areas – So it's no use talking about growth. You've got to talk about how you shift the dynamics at work in a society, and I don't think we do enough about that."

The seminar was part of a series of such discussions that feed into the broader Poverty and Inequality Initiative at UCT, and was organised by the university's Institutional Planning Department. 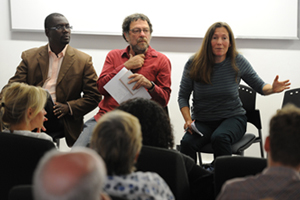