Who will buy?
A familiar face in the campus community, Jeremy Sols runs the fruit stall at the Jammie Food Court and interacts with hundreds of students every week. The former carpenter says the fruit trade is new to him. "I used to work as a cabinet-maker, but here I've learnt about respect and discipline. I go to the market at 4am, and I'm here from 7am until 4pm. They are long days, but I enjoy it here. The students are friendly, and always polite." The picture above formed part of a regular photo essay - this time on campus retailers - on UCT's homepage. Look out for upcoming photo essays that showcase the School of Dance as it celebrates its 80th birthday, and that introduce some of UCT's recently acquired artworks. 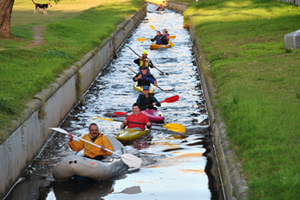 Dip your paddle
Paddlers on the Black River during last year's Peninsula Paddle, an event which highlighted the state of Cape Town's rivers, canals and vleis - many of which remain polluted or clogged with weeds. The good news is that flamingos have returned to the Black River, previously one of the city's most polluted waterways, indicative of how water management programmes are making a difference, says UCT's Dr Kevin Winter, who leads the initiative. The UCT community is invited to participate in this year's Peninsula Paddle through city waterways on 8 June, to mark World Environment Day on 5 June. Go to www.peninsulapaddle.wordpress.com to register and for more information. 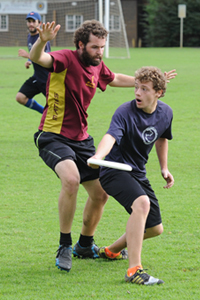 Ultimate Frisbee winners
The UCT Ultimate Club trounced the University of Stellenbosch's 1st team 17-10 in the annual Intervarsity held recently in Stellenbosch. Niell Strydom, captain of the Flying Tigers - UCT Ultimate's first team - is seen here faking a throw to the force side. Strydom is one of six UCT players selected for the South African team to compete in the World Ultimate Club Championship in Italy this August. UCT Ultimate recently finished third in the South African National Club Championships following on from winning the Cape Town Ultimate Summer League for the first time in its history. The growing sport of Ultimate, formerly Ultimate Frisbee, is a cardio-intensive game (similar to touch rugby), with the aim of getting the Frisbee over the goal-line without being intercepted by the opposition. 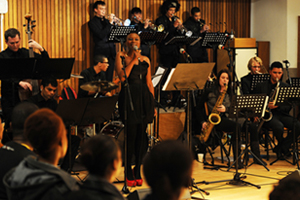 Big band jazz
UCT's Big Band wowed a packed audience recently when they performed at the South African College of Music (SACM). The concert took place under the auspices of UCT's annual celebration of everything African - Africa Month - and also raised funds for the band to perform at this year's National Arts Festival held in Grahamstown. Pictured here accompanying jazz artist Zoe Modiga, the band comprises jazz students from SACM, led by the head of Jazz Studies Associate Professor Mike Campbell. The band can be seen in action again at the Big Band Festival at the Baxter Theatre on 31 May, followed in early June by another fundraising concert at the SACM.