The FNB UCT Ikey Tigers are back in business. With two impressive away wins under their belt, Kevin Musikanth's side are well placed for a semi-final push as they head into the fourth round of the FNB Varsity Cup.

The first of those victories was a historic triumph for the Ikeys against old foes Maties at the Danie Craven Stadium on 10 February. The Ikeys outclassed their Stellenbosch rivals 33-16 with a dominant performance. Having last bested Maties in the inaugural tournament in 2008, UCT made their intentions known early on with a powerful scrum that had the hosts back-pedalling. Two tries from Ikey flanker Jason Klaasen and one each from Lihleli Xoli and captain Liam Slatem did most of the damage, while flyhalf Dean Grant - a former Matie - kept the scoreboard ticking over with three conversions and two penalties. 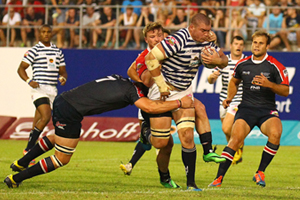 Bulldozer: Ikeys' Shaun Mc Donald powers forward during the encounter with the FNB Nelson Mandela Metropolitan University's Madibaz on February 17. The pride of UCT romped home with a 26-13 victory in Port Elizabeth.

In their next match, Kevin Musikanth's side triumphed 26-13 in a tough away trip to Madibaz from Nelson Mandela Metropolitan University on 17 February. By beating Madibaz the Ikeys reclaimed the Monte Taljaard Trophy, awarded in honour of UCT First XV flank and Grey PE rugby star Monte Taljaard, who passed away in a car accident in September 2008.

The win leaves UCT in the semi-final spots in fourth with nine points, trailing third-placed Madibaz only by points-difference. Next up for the boys in blue-and-white hoops is a televised home encounter against Tuks on 24 February. Pop down to the Green Mile to yell your support at the 16h45 kick-off.