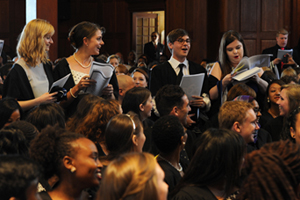 One voice: A flash mob featuring opera singers from the South African College of Music entertain guests in Jameson Hall.

Deputy Vice-Chancellor Professor Danie Visser called it the "Brindisi Flash Mob" and it set the tone at the morning graduation on 17 December '“ the final day of the week-long celebrations, and the Humanities faculty's fourth and final ceremony.

The surprise item clearly delighted the gathering in Jameson Hall as one by one, six opera singers from the faculty's South African College of popped up in the south and north bays, in the gallery, and among the graduands, singing a brindisi from Giuseppe Verdi's opera, La traviata.

Put simply, a brindisi is a song exhorting a company to drink a toast. In an operatic brindisi, one character introduces a toast with a solo melody, and the full ensemble later joins in the refrain.

In the spirit of the event, members of the platform party also joined the toast (there was sparkling grape juice in these 'joyful chalices'!). 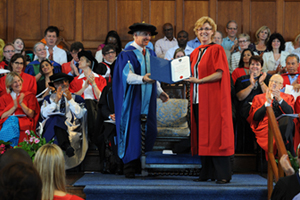 Next up on the platform was Dr Helen Macdonald (anthropology) to receive her Distinguished Teacher Award from Vice-Chancellor Dr Max Price, eliciting much applause from graduands.

An excerpt from the nomination reads: "Macdonald's teaching portfolio and her students' and colleagues' comments all indicate clearly that she is as passionate about her teaching as she is about her discipline, anthropology. She is a demanding teacher who inculcates a love of learning. Even in large undergraduate classes, Macdonald has a keen awareness of each student's individual needs.

"Her dedication to 'radical education' stretches also to postgraduates, and she strives to ensure that the next generation of anthropologists will combine an excellent grasp of ideas and theory with a solid set of research practices, enabling them to compete internationally and to share her commitment to a transformative social justice agenda."

Ending a week dominated by the news of former President Nelson Mandela's death Dean of the Faculty of Humanities Professor Paul Ensor's address to students reminded them that there is work to be done in transforming society.

Ensor has officiated at 45 graduation ceremonies in her 10 years at the helm of a faculty that had seen much change during her deanship.

The country's youth was its most precious resource, particularly the role they played in society, Ensor continued.

"They provide fertile ground. Their minds are open to fresh ways of looking at old problems."

Contrasting the lives of Presidents John F Kennedy and Nelson Mandela, Ensor said that although they'd been born in different times and circumstances, they were remembered for having led their countries under the banners of human rights and liberty.

"Most of you are Born Frees, born after Mandela was freed from prison," Ensor said. "You are a special generation, born at a special moment in time. In the past few weeks you must have been aware of this.

"What is the legacy of the Born Free generation? How would you like to be remembered by your children and your children's children?"

She said that as graduates they would face a country characterised by poverty, inequality, inadequate health provision and the insidious spread of corruption.

Ensor urged them to choose their moral compass with the past week in mind; when Mandela's legacy had been brought into sharp relief.

"Here are rich lessons for all of us, offering a treasure trove of wisdom and advice few young people have access to.

"Think back also to UCT experience that has transformed and prepared you for the road you are about to walk."