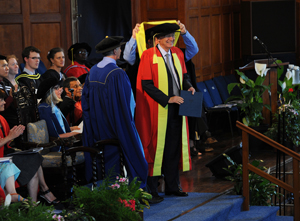 Delighted: Allan Gray is awarded an honorary doctorate in economic sciences at the Faculty of Commerce's second graduation ceremony.

"Let us all honour [Nelson Mandela] by keeping on the righteous path he so ably lit for us."

These were the stirring words of an emotional Allan Gray, after receiving an honorary doctorate in economic sciences at Friday's graduation ceremony.

He paid tribute to the late Nelson Mandela and expressed "a profound respect for the glorious memory of Nelson Mandela" and added that South Africans would continue to benefit "from our beloved Madiba's visionary and courageous leadership".

An internationally respected businessman and a visionary innovator in the financial sector, Gray encouraged UCT graduands to "lead purposeful, challenging and productive lives", adding that "humility accelerates personal growth and is entirely compatible with having the courage of one's convictions and a steely resolve".

Gray said he was proud, yet humbled by the university's recognition and delighted to receive a degree without even opening a book.

Orator Professor Alison Lewis described him as a man "ruled more by his head than his heart", who used his name, which ultimately became an internationally trusted brand, "as a way of showing his absolute commitment to his clients."

Gray completed his undergraduate degree at Rhodes University and MBA at Harvard. He believes that the encouragement of, and support for, entrepreneurship is crucial for a prosperous South Africa. By awarding this honorary degree the university also recognises his generous philanthropic efforts consistently in favour of higher education.

He exhorted graduands to "strive for excellence and to ensure that you add more value to your employer than you cost them. In this way you can become a net contributor to the welfare of others."