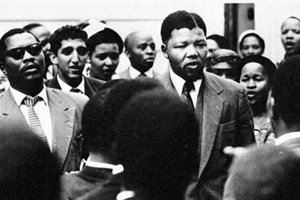 In fact for much of the latter half of the decade, he was one of the 156 accused in the mammoth Treason Trial, at great cost to his legal practice and his political work, though he recalls that, during his incarceration in the Fort, the communal cell "became a kind of convention for far-flung freedom fighters". After the Sharpeville Massacre on 21 March 1960, the ANC was outlawed, and Mandela, still on trial, was detained, along with hundreds of others.

The Treason Trial collapsed in 1961 as South Africa was being steered towards the adoption of a republic's constitution. With the ANC now illegal, the leadership picked up the threads from its underground headquarters, and Mandela emerged at this time as the leading figure in this new phase of struggle. Under the ANC's inspiration, 1,400 delegates came together at an All-in African Conference in Pietermaritzburg during March 1961.

Mandela was the keynote speaker. In an electrifying address he challenged the apartheid regime to convene a national convention, representative of all South Africans, to thrash out a new constitution based on democratic principles. Failure to comply, he warned, would compel the majority (blacks) to observe the forthcoming inauguration of the Republic with a mass general strike. He immediately went underground to lead the campaign. Although fewer answered the call than Mandela had hoped, it attracted considerable support throughout the country. The government responded with the largest military mobilisation since the Second World War, and the Republic was born in an atmosphere of fear and apprehension.

Forced to live apart from his family (and he and Winnie by now had two daughters; Zenani, born in 1959, and Zindzi, born 1960), moving from place to place to evade detection by the government's ubiquitous informers and police spies, Mandela had to adopt a number of disguises. Sometimes dressed as a labourer, at other times as a chauffeur, his successful evasion of the police earned him the title of the Black Pimpernel.

He managed to travel around the country and stayed with numerous sympathisers - a family in Market Street, central Johannesburg, in his comrade Wolfie Kodesh's flat (where he insisted on running on the spot every day), in the servant's quarters of a doctor's house where he pretended to be a gardener, and on a sugar plantation in KwaZulu-Natal. It was during this time that he, together with other leaders of the ANC, constituted a new section of the liberation movement, Umkhonto we Sizwe (MK), as an armed nucleus with a view to preparing for armed struggle, with Mandela as its commander in chief.

At the Rivonia Trial, Mandela explained: "At the beginning of June 1961, after long and anxious assessment of the South African situation, I and some colleagues came to the conclusion that as violence in this country was inevitable, it would be wrong and unrealistic for African leaders to continue preaching peace and non-violence at a time when the government met our peaceful demands with force. It was only when all else had failed, when all channels of peaceful protest had been barred to us, that the decision was made to embark on violent forms of political struggle, and to form Umkhonto we Sizwe ... the government had left us no other choice."

In 1962 Mandela left the country, as 'David Motsamayi', and travelled abroad for several months. In Ethiopia he addressed the Conference of the Pan African Freedom Movement of East and Central Africa, and was warmly received by senior political leaders in several countries, including Tanganyika, Senegal, Ghana and Sierra Leone. He also spent time in London, where he managed to find time, with Tambo, to see the sights, as well as to spend time with many exiled comrades. During this trip Mandela met up with the first group of 21 MK recruits on their way to Addis Ababa for guerrilla training.