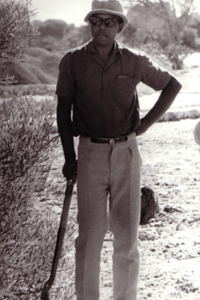 Not long after his return to South Africa, Mandela was arrested on 5 August 1962 and charged with illegal exit from the country and incitement to strike. He was in KwaZulu-Natal at the time, passing through Howick on his way back to Johannesburg, posing again as David Motsamayi, now the driver of a white theatre director and MK member, Cecil Williams.

Since he considered the prosecution a trial of the aspirations of the African people, Mandela decided to conduct his own defence. He applied for the recusal of the magistrate, on the ground that in such a prosecution a judiciary controlled entirely by whites was an interested party and therefore could not be impartial, and on the ground that he owed no duty to obey the laws of a white parliament, in which he was not represented. Mandela prefaced this challenge with the affirmation: "I detest racialism, because I regard it as a barbaric thing, whether it comes from a black man or a white man."

Mandela was convicted and sentenced to five years imprisonment. He was transferred to Robben Island in May 1963, only to be brought back to Pretoria again in July. The authorities issued a statement to the press that this had been done to protect Mandela from assault by PAC prisoners. "This was patently false; they had brought me back to Pretoria for their own motives, which soon became clear." Not long afterwards he encountered Thomas Mashifane, the foreman from Liliesleaf Farm in Rivonia where MK had set up their HQ. He knew then that their hide-out had been discovered. A few days later he and 10 others were charged with sabotage.

The Rivonia Trial, as it came to be known, lasted eight months. Most of the accused stood up well to the prosecution, having made a collective decision that this was a political trial and that they would take the opportunity to make public their political beliefs. Three of the accused - Mandela, Sisulu and Govan Mbeki - also decided that, if they were given the death sentence, they would not appeal. Mandela's statement in court during the trial is a classic in the history of the resistance to apartheid, and has been an inspiration to all who have opposed it. He ended with these words: "I have fought against white domination, and I have fought against black domination. I have cherished the ideal of a democratic and free society in which all persons live together in harmony and with equal opportunities. It is an ideal which I hope to live for and to achieve. But if needs be, it is an ideal for which I am prepared to die."

All but two of the accused were found guilty and sentenced to life imprisonment, on 12 June 1964. The black prisoners were flown secretly to Robben Island immediately after the trial was over to begin serving their sentences.

Mandela's time in prison, which amounted to just over 27-and-a-half years, was marked by many small and large events which played a crucial part in shaping the personality and attitudes of the man who was to become the first President of a democratic South Africa. Many fellow prisoners and warders influenced him, and he, in turn, influenced them. While he was in jail his mother and son died, his wife was banned and subjected to continual arrest and harassment, and the liberation movement was reduced to isolated groups of activists.

In March 1982, after 18 years, he was suddenly transferred to Pollsmoor Prison in Cape Town (with Sisulu, Raymond Mhlaba and Andrew Mlangeni), and in December 1988 he was moved to the Victor Verster Prison near Paarl, from where he was eventually released. While in prison, Mandela flatly rejected offers made by his jailers for remission of sentence in exchange for accepting the bantustan policy by recognising the independence of the Transkei and agreeing to settle there. In the 80s, Mandela and others again rejected an offer of release, on condition that he renounce violence. Prisoners cannot enter into contracts - only free men can negotiate, he said.

Nevertheless, Mandela did initiate talks with the apartheid regime in 1985, when he wrote to Minister of Justice Kobie Coetsee. They first met later that year when Mandela was hospitalised for prostate surgery. Shortly after this he was moved to a single cell at Pollsmoor, and this gave Mandela the chance to start a dialogue with the government - which took the form of 'talks about talks'. Throughout this process, he was adamant that negotiations could only be carried out by the full ANC leadership. In time, a secret channel of communication would be set up whereby he could get messages to the ANC in Lusaka, but at the beginning he said: "I chose to tell no-one what I was about to do. There are times when a leader must move out ahead of the flock, go off in a new direction, confident that he is leading his people in the right direction."

Released on 11 February 1990, Mandela plunged wholeheartedly into his life's work, striving to attain the goals he and others had set out almost four decades earlier. In 1991, at the first national conference of the ANC held inside South Africa after being banned for decades, Nelson Mandela was elected president of the ANC, while his lifelong friend and colleague, Oliver Tambo, became the organisation's national chairperson.