Nelson Rolihlahla Mandela: A legend in his own time 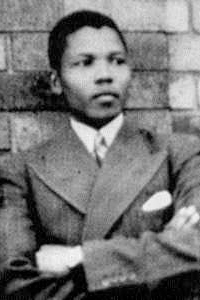 Rolihlahla Mandela was born in Mvezo, a village near Mthatha in the Transkei, on 18 July 1918, to Nonqaphi Nosekeni and Henry Mgadla Mandela. His father was the principal councillor to the Acting Paramount Chief of the Thembu. Rolihlahla literally means "pulling the branch of a tree". After his father's death in 1927, the young Rolihlahla became the ward of Jongintaba Dalindyebo, the Paramount Chief, to be groomed to assume high office. Hearing the elders' stories of his ancestors' valour during the wars of resistance, he dreamed also of making his own contribution to the freedom struggle of his people.

After receiving a primary education at a local mission school, where he was given the name Nelson, he was sent to the Clarkebury Boarding Institute for his Junior Certificate and then to Healdtown, a Wesleyan secondary school of some repute, where he matriculated. He then enrolled at the University College of Fort Hare for the Bachelor of Arts degree, where he was elected onto the Students Representative Council. He was suspended from college for joining in a protest boycott, along with Oliver Tambo.

He and his cousin Justice ran away to Johannesburg to avoid arranged marriages, and for a short period he worked as a mine policeman. Mandela was introduced to Walter Sisulu in 1941 and it was Sisulu who arranged for him to do his articles at Lazar Sidelsky's law firm. Completing his BA through the University of South Africa (UNISA) in 1942, he commenced study for his LLB shortly afterwards (though he left the University of the Witwatersrand without graduating, in 1948). He entered politics in earnest while studying and joined the African National Congress in 1943.

Despite his increasing political awareness and activities, Mandela also had time for other things. "It was in the lounge of the Sisulu's home that I met Evelyn Mase ... She was a quiet, pretty girl from the countryside who did not seem overawed by the comings and goings ... Within a few months I had asked her to marry me, and she accepted." They married in a civil ceremony at the Native Commissioner's Court in Johannesburg, "for we could not afford a traditional wedding or feast". Mase and Mandela went on to have four children: Thembikile (1946), Makaziwe (1947), who died at nine months, Makgatho (1951) and Makaziwe (1954). The couple divorced in 1958.

At the height of the Second World War, in 1944, a small group of young Africans who were members of the African National Congress, banded together under the leadership of Anton Lembede. Among them were William Nkomo, Sisulu, Oliver R Tambo, Ashby P Mda and Mandela. Starting out with 60 members, all of whom were residing around the Witwatersrand, these young people set themselves the formidable task of transforming the ANC into a more radical mass movement.

Their chief contention was that the political tactics of the 'old guard' leadership of the ANC, reared in the tradition of constitutionalism and polite petitioning of the government of the day, were proving inadequate to the tasks of national emancipation. In opposition to the old guard, Lembede and his colleagues espoused a radical African nationalism grounded in the principle of national self-determination. In September 1944 they came together to found the African National Congress Youth League (ANCYL).

Mandela soon impressed his peers by his disciplined work and consistent effort and was elected as the league's National Secretary in 1948. By painstaking work, campaigning at the grassroots and through its mouthpiece Inyaniso (Truth) the ANCYL was able to canvass support for its policies among the ANC membership.