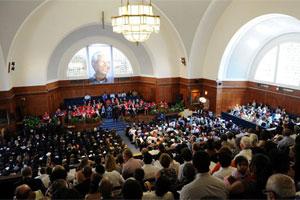 Here's to you: UCT's graduation week (11 to 17 December) got underway today (11 December) as the Faculty of Health Sciences started proceedings, basking in the warmth of Madiba's smile.

While the UCT community continues to mourn the passing of former president Nelson Mandela, we also celebrate a life and spirit who saw education as a key to a better future - not just for the individual but the country as a whole. Today, with our first December graduation ceremony now complete, we honour Nelson Mandela for his inspiration and drive to see more young South Africans accessing education.

A giant image of a smiling Nelson Mandela, strung between the pillars of historic Jameson Hall, and inside the hall, greeted graduands, their families and supporters this morning (13 December) as the Faculty of Health Sciences kicked off a celebratory, week-long programme of graduations.

Addressing a full hall shortly before the start of official proceedings, presiding Deputy Vice-Chancellor Professor Sandra Klopper said that while South Africa was a nation in mourning, following former President Nelson Mandela's death on 5 December, graduations were a time to celebrate.

Her sentiments were echoed by Vice-Chancellor Dr Max Price who conveyed the condolences of all present to UCT's Chancellor, Graça Machel, Mandela's widow, who was unable to attend the graduation ceremonies.

"We had thought of cancelling graduation, also with respect to our Chancellor, but decided instead we have to celebrate a magnificent life in Nelson Mandela.

He told health sciences graduands: "Nothing would have pleased Madiba more than to be here, at his wife's side, to celebrate you who have worked so hard and for so long, starting class in January and ending in November, working weekends, and on call." 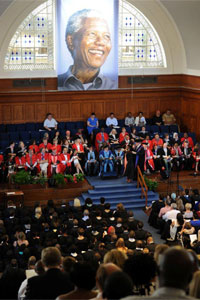 Price told the graduands that once capped, they would become members of Convocation, part of a community of over 100 000 living alumni all over the globe.

"It's an important link to be part of this community and to carry the presence, pride and reputation of the university, with more than 180 years in its past, into the future.

"As you go into the world of work you will be judged on your technical competence. But the knowledge you have today will quickly be out of date. What won't be out of date is your value system and the way you live your lives. Look to the life of Madiba for values and as a role model."

Price asked the new graduates to lift their scrolls to thank their families and those who had supported them, and to thank the members of faculty who had been their teachers.

As part of the ceremony the South African College of Music's Dizu Plaatjies took to the platform to lead a traditional isiXhosa lament for Mandela, calling on his ancestors to receive him.

Executive director of communication and marketing Gerda Kruger said: "The excellence and diversity of our graduates is a visible example of what Madiba stood for. He valued education as a means to change one's future and your society for the better. He applauded perseverance and discipline. He honoured those who took on challenges and worked hard to achieve success.

"Our students who are graduating this month are each in their own way giving effect to Madiba's dreams and principles. They will go on to change their different communities and the world for the better."