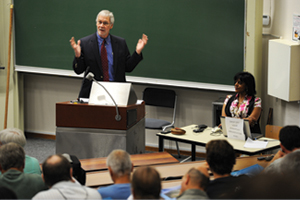 Milestone: DVC Prof Danie Visser opens the Biodiversity Southern Africa conference at UCT from 3 to 7 December, marking the first birthday of the Department of Biological Sciences. Also in picture is the department's head, Prof Anusuya Chinsamy-Turan.

UCT's Department of Biological Sciences celebrates its first birthday with a four-day conference on biodiversity, offering a cornucopia of specialists in fields as diverse as viruses and red tide, Renosterveld, False Bay's Ichthyofauna (or fish life), and edible insects from the Blouberg in Limpopo.

Addressing delegates at the opening of Biodiversity Southern African 2013 on 3 December, Deputy Vice-Chancellor Professor Danie Visser confessed he would be playing truant to attend some of the presentations, so enticing is the offering.

The Department of Biological Sciences, headed by the chair of the conference organising committee Professor Anusuya Chinsamy-Turan, is the product of a merger between zoology and botany last year.

"This conference celebrates not only the diversity of our natural heritage but also the emergence of this new department, UCT's newest," said Visser in his welcome to the more than 200 delegates.

In addition to nine keynote speakers, there will be two free public talks. The first is by Dr Steven Goodman, a MacArthur filed biologist at the Field Museum of natural History in Chicago. Goodman will be talking on Madagascar's biodiversity (3 December at 17h30 in John Day LT 1).

On 5 December Wits University's Associate Professor Marcus Byrne will be talking on dung beetles and how they navigate by the Milky Way. This work earned his team an Ig Nobel Prize for biology and astronomy and he has also given a TED presentation on this ground-breaking research.

An American creation, the Ig Nobels parody the Nobel Prizes, and are given annually for ten 'unusual or trivial' achievements in scientific research. According to their mission, the aim is to "honour achievements that first make people laugh, and then make them think".

For more information on the conference programme.