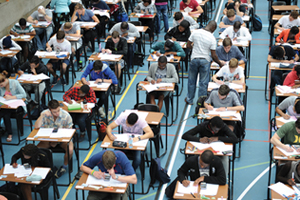 Brain drain:
Students in the Sport's Centre write furiously as they battle the clock during end-of-year exams.
They were among thousands of UCT students to tackle hundreds of examination papers over the past few weeks. Most students finished their exams by mid-November and in December over 5 000 final year undergraduates and postgraduates are expected to be capped at 13 graduation ceremonies that will take place between 11 and 17 December. Honorary degrees will also be bestowed on entrepreneur and philanthropist Dr Alan Grey, as well as eminent academics Professors Derek Yellon and Daniel Kunene. 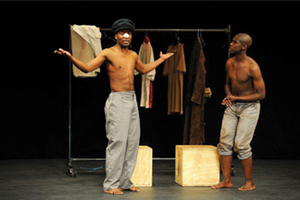 Performing artists:
Drama students Luc-Given Mkhondo (left) and Yanga Jikela appear in a scene from the play, Woza Albert.
STheir performance formed part of the Final Year Auditions at the Little Theatre on UCT's Hiddingh campus. This event follows on from the students' final exam, where they perform four pieces that take the form of auditions. These auditions must demonstrate the students' versatility as well as their vocal and physical ability. Theatrical and film agents are among the audience members, and according to Assoc Prof Chris Weare, the University's Department of Drama has a strong tradition of placing actors in the work place. "Of our 19 fourth year students 11 are on agency books," he added. 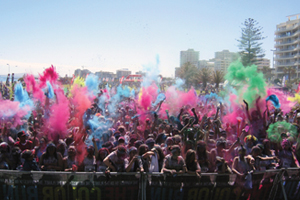 The colour of money:
Runners create a human sea of colour on the Sea Point promenade.
Approximately 12 500 Capetonians came out recently to support Cape Town's first Color Run and its beneficiary, SHAWCO, who will receive some of the proceeds raised. The first of these themed races took place in Phoenix, Arizona last year and the event has since grown into a worldwide phenomenon. This year colourful fun runs will be hosted in 30 countries and are expected to attract one million participants. SHAWCO used the occasion to launch its Change a Life fundraising campaign. For more information visit www.shawco.org/changealife. 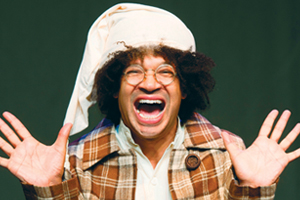 Festive nightcap:
Back at the Baxter for the silly season is the irrepressible Marc Lottering.
He takes the title role of Scrooge in Lara Foot's adaptation of Charles Dickens's classic A Christmas Carol. Foot has assembled a formidable cast and creative team to bring Dickens' classic to life with a mix of music, comedy and drama. She has also taken the bold move of setting it in District Six, but during the early 1900s - long before the forced removals with which the area is now associated. Luminaries of stage and screen, Shaleen Surtie-Richards, Andrew Buckland and Christo Davids, play the ghosts of Christmas past, and a 50-strong cross-cultural children's choir also helps the production stand out as an innovative piece of theatre.