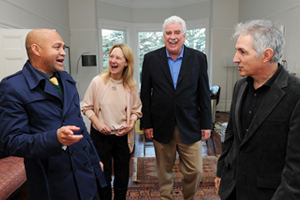 There was Sanskrit and laughter at Glenara on 3 September, as UCT bade an official farewell to one of its stalwarts, Dr Jim McNamara, who retired as executive director of UCT's Development and Alumni Department (DAD) on 30 August.

The Vice-Chancellor, Dr Max Price, congratulated him on 23 years of top-level service to the university.

McNamara spent ten years as deputy director of the Alumni Association at the University of California, Santa Barbara - a department similar to UCT's DAD - before arriving at UCT in 1991 for a year-long stint as a senior lecturer in Asian religions in the Department of Religious Studies. Since then, McNamara enjoyed a "diverse" career at UCT, said Price.

He began a seven-year tenure as director of student housing in 1992 and then moved to the position of deputy project manager for PRISM (Project to Revolutionise Information Systems and Management), in which he shared overall responsibility for the effective running of the project for implementing the SAP financial accounting and HR/payroll information system at UCT.

This preceded McNamara's role as deputy registrar for academic administration and project director of ISIS (Integrated Student Information System) from 1999 until being appointed as executive director of DAD in 2006.

"He's made a huge contribution to UCT in various ways, and certainly during the period that he's been supporting the fundraising and alumni activities," said Price, adding that, "unlike the other areas, there are rather clear bottom-line ways of measuring success of those projects".

"With the exception of one year, 2011, when there was a dip which was in large measure because of the financial crisis, throughout his tenure there was an increase in the funds raised - significant increases, way above inflation - real increases often of 10, 20 and 30%," Price said. "In the five years that I have been in office, we have collectively raised R1 billion. It's really a phenomenal achievement for that department, and Jim has shepherded the department to that."

Price then shared a comment from one of McNamara's colleagues at DAD: "We will miss his dry sense of humour, how before a long weekend he would send the entire staff an email saying, to reward us for our hard work, he would give us the day off, and then the fact that to this day he still manages in meetings to quote and translate key texts in Sanskrit, a remnant of his former life in religious studies."

"He doesn't speak much, but, the result of that is when he does speak, everyone listens. They know that there's going to be a piece of wisdom shared, and it's usually spot-on and very helpful to get us out of a sticky dead-end."

It appears that old habits die hard, as the retired McNamara did not pass up a final opportunity to raise some funds for the university. "I hope that you all will consider your supporting of UCT in your wills, and maybe Russell and I will quietly work the room later and have some conversations," he jokingly prodded guests.

"This place has literally changed our lives," said McNamara on behalf of himself and his wife, Marilynn, a long-serving UCT Libraries Operations Officer who is also retiring.

The two will be working in the animal welfare world upon leaving UCT, but McNamara also expressed his eagerness to remain in the education sector in "one way or another".